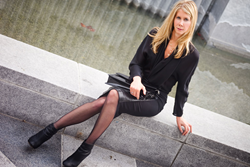 Jill Milan®, a provider of luxury fashion and accessories, announced that founder and CEO Jill Fraser will speak on a panel during the INNOVISION: Fashion Matrix | Fashion Tech Conference during Tech Fashion Week. Fraser is featured on a panel entitled “Future of Retail: IoT & Consumer Behavior” scheduled for 6:30 p.m. today at Target Open House in San Francisco.

Fraser holds bachelor’s and master’s degrees from Oxford University in England, is on the board of advisers to a Silicon Valley artificial intelligence (AI) startup and served on the board of directors of the Institute for International Film Financing.

Fraser’s interest in animal causes prompted her to found Jill Milan, which launched in 2011. “I couldn’t find luxury-quality handbags that were not made of leather or other animal-derived materials,” Fraser said. Jill Milan has subsequently expanded its product offerings to include other sustainable animal-friendly fashion and accessories. The company has contributed more than 10 percent of revenue to non-profit organizations working on behalf of animal welfare causes, as well as charities supporting women.

Jill Milan handbags have drawn growing attention from influential fashion media. W Magazine has covered Jill Milan in multiple issues, recognizing the Octagon Clutch and Art Deco Clutch in its “Most Wanted” feature, and The Zoe Report recognized the Newbury Street Portfolio for its ability “to go from the office to cocktail hour.”

Fashion Tech Conference seeks to foster an innovative community where influencers, investors, startups, creatives and technologists connect and learn about the future of fashion and retail.

About Jill Milan
Jill Milan is a luxury provider of cruelty-free handbags, apparel and fashion accessories. Made of exquisite materials, Jill Milan handbags are crafted in Italy by artisans who have created handbags and accessories for some of Europe’s best known fashion houses. All Jill Milan products are free of animal-derived materials, and the company contributes to animal-welfare organizations. Jill Milan, founded by Jill Fraser and Milan Lazich, is the only luxury handbag line entirely free of animal-derived materials which regularly appears on Hollywood’s red carpets. Visit Jill Milan on the Web and follow Jill Milan on Facebook.