Jim Blasingame to Speak on Civility in the Digital Age at The Ferguson Library in Stamford, CT 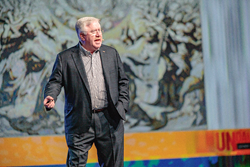 Hundreds of years before a robot takes us down, we'll do it to ourselves by failing to establish digital ethics. --Jim Blasingame

The Ferguson Library announces the next speaker in their Civility in America series. Jim Blasingame, award-winning author, business expert and futurist will speak on Thursday, October 25, at 6:00 pm. Blasingame will reveal the source of pressure on civility and our increasing anxiety about technology: An unprecedented convergence of 21st century digital leverage and the ethical imperative of humans, beginning with trust. Blasingame’s presentation will be based on his new book, "The 3rd Ingredient: The Journey of Analog Ethics into the World of Digital Fear and Greed" (SBN Books 2018), which has won five international awards. To attend, register here.

Now in its sixth year, the Civility in America series is sponsored by The Dilenschneider Group, The Ferguson Library and Hearst Media Services. Past speakers have included Dr. Ben Carson, Lawrence Kudlow, Charles Osgood, Fay Vincent and Steve Forbes.

“Jim Blasingame’s contribution to our Civility Series will be an important one,” said Bob Dilenschneider. “His thought-leadership has revealed why the analog world we’re exiting hasn’t prepared us ethically for the compelling and sometimes rude digital world that’s increasingly our reality.” Dilenschneider is President of The Dilenschneider Group, one of the original sponsors of the Civility in America series.

“Hundreds of years before a robot takes us down,” Blasingame says, “we humans will do it to ourselves by failing to establish ethics that can move at the speed of light. We have to create and become devoted to digital ethics, because even when fully established in the Digital Age, humans will still require trust.”