“Cattle Empire” from Christian Faith Publishing author Jim Forbes is a brilliant account about the cattle empire, its origin, and how it grew. 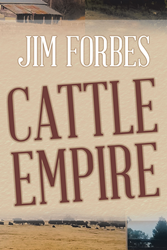 “Cattle Empire”: a potent novel that reveals the establishment and growth of the cattle industry over the years and the truths behind some misperceptions. “Cattle Empire” is the creation of published author Jim Forbes, a teacher and a football coach. He was able to have the privilege of marrying his beautiful wife, Shelia, in 2003, and they have spent much of their time traveling and taking pictures throughout the United States.

Forbes shares, “The purpose of this publication is to show how, when, and where the cattle empire started.

It’s real start was when small herds were driven to Louisiana from Texas. The real start of the empire was when Thomas Jefferson did the Louisiana Purchase. This was the real start because there were thousands of wild cattle roaming in what is now Texas, New Mexico, Arizona, Oklahoma, and Colorado.

These were the cattle being driven to Louisiana some forty years before the civil war ended and the trail drives began. The book has all the breeds of cattle and horses used in the trail drives and the cowboys—their clothes, equipment, and their workdays.

It tells of the cow towns that started and grew, and when the trail drives ended, they dried up and became ghost towns, of which a few still exist. But most are copies, or movie sets.

The towns in Kansas with a railroad became famous, and the most famous was Dodge City. It grew fast and was a wild place. It was a place where many legends were born.

In the book, you can see where the trails were and how the cattle were driven.

The cowboys faced danger continually—for instance, rustlers, Indians, snakes, stampedes, and river crossings, and for some, the danger was at trail’s end. It was a sad time for some, and a time for some to become rich.

An example is a cow in Texas was worth $1.50, maybe, but that same cow driven one thousand miles north to a railhead would bring as much as $20 plus, depending on demand. If a man drove four thousand heads from Texas to Kansas, and sold them at $20 each, he had $80,000 and was wealthy. The problem was getting home without getting robbed.

The early cattle industry was responsible for thousands of jobs in these cow towns, and advanced the railroad much sooner than if they weren’t started. The cattle drives were also responsible for most of the Wild, Wild West legends. Dodge City being the most famous.

The book has a running outline of dates of ranching growth and the inventions that provided both food and water for all livestock.

In closing, Hollywood has made cowboy’s life and work look easy and romantic, with clean clothes, singing, and smiles. It wasn’t like that at all, just the opposite. Another wrong example was Hollywood’s Red River. To drive 10, 000 heads, it would take 100 cowboys, 300 horses, and the trail line would be two miles long. The average was 1,500 to 5,000 head. I hope you enjoy the book.”

Published by Christian Faith Publishing, Jim Forbes’s new book is a fascinating read that brings information and awareness of how the cattle empire flourished ever since its humble beginnings. Supplying the readers with necessary knowledge, this book is surely interesting.

For additional information or inquiries about “Cattle Empire,” contact the Christian Faith Publishing media department at 866-554-0919.