Jim R. Turner’s newly released “The Mystery of Life” is a revealing tome that allows the readers to know more about the Creator and themselves

“The Mystery of Life” from Christian Faith Publishing author Jim R. Turner is a masterful handbook that shares what the author has discovered after memorizing God’s Manual for Life every day for more than half a century. 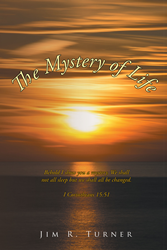 “The Mystery of Life”: a brimful account that explains to the readers who they are and reveals the truth about the Creator, and about what they need to know regarding the most important issues of their life. “The Mystery of Life” is the creation of published author Jim R. Turner, a man who was introduced to the world of Christianity at an early age. He ministered as a youth pastor in the Roseville Bible Church while teaching the adult Sunday school class.

Turner writes, “More than half a century ago, a young man who had been attending weekly church services with his family became increasingly aware of conflicts that existed among the different ‘Christian’ denominations. After spending three years studying in a conservative Bible school, he still found himself questioning much of what he had been taught over the years. Every denomination insisted that their beliefs are based on the Bible, but after seeking advice from many church leaders, he found that their conflicting answers only raised more questions. He decided that instead of relying on secondhand information from men who claimed to speak for God, it was his responsibility to know what the Bible said about life. He was encouraged by a promise in John 8:32, ‘You shall know the truth and the truth will set you free.’ After much prayer and consideration, he vowed to God that he would make memorizing the Bible a daily priority in his life. He has now kept that vow for more than half a century. Although Christian churches and most religions use verses from the Bible to support their religion, the Bible is not a religious book; rather, it is a living legal document inspired by our Creator as a Manual for Life. Little did he suspect that it contained a mystery so profound that it would completely transform his life. Only after the Lord Jesus Christ was crucified, rose from the dead, and ascended to the right hand of the throne of God was the most profound mystery the world has ever known—revealed. What you are about to read has the power to completely transform your life. This is not a book about religion or about how to believe in yourself and become a better person. This book contains the literal words and promises of your Creator to every soul that longs to know the truth and fully understand the Mystery of Life. ‘If any man speaks, let him speak the words of God.’ (1 Pet. 4:11).”

Published by Christian Faith Publishing, Turner’s new book is an encouraging account telling everyone that regardless of the disappointments and failure of their past, in spite of their current difficulties, they are about to discover a mystery that is beyond anything they have ever known.

This book is about what the Creator has revealed in His Manual about His people, about why they are here, and about the special place that everyone holds in the mind of God.

View a synopsis of “The Mystery of Life” on YouTube.

Consumers can purchase “The Mystery of Life” at traditional brick & mortar bookstores, or online at Amazon.com, Apple iTunes store, or Barnes and Noble.

For additional information or inquiries about “The Mystery of Life,” contact the Christian Faith Publishing media department at 866-554-0919.