Jimmie Allen’s newly released “Run, Toby, Run” unravels a riveting story of a man whose first resort is to run

“Run, Toby, Run” from Christian Faith Publishing author Jimmie Allen shares a gripping novel that follows a man who finds himself part of two gangs that leads him to trouble. 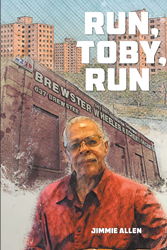 “Run, Toby, Run”: a thrilling account of a man and his pursuit for trouble and escape. “Run, Toby, Run” is the creation of published author Jimmie Allen, a brilliant writer of splendid works.

Allen shares, “In the middle to late 1950s, I lived in the Brewster Projects that were infested with gang activities. In order to survive being beat up, you were encouraged to participate or be a part of a gang. There were two things I was good at; fighting was one, and running was the other. Both got me out of some tough situations. The Brewster Project recreation center was right in the area of the Brewster’s twelve-story apartment buildings populated by a gang called the Russians. I spent a lot of time at the center, which was a short distance from my house. I learned to swim there, took boxing there, even learned to ice skate there. The Russians was too many to fight; running was my best option until I joined the baby Russians. The school I attended was in the area of the gang called the Angels. I eventually found myself being a part of both gangs. Running and ducking allowed me to escape being found out until my family moved out of the area. Running kept me out of more trouble than fighting. The story is based on my ability to avoid potential deadly situations.”

Published by Christian Faith Publishing, Jimmie Allen’s new book gives the readers an interesting story about a man and his adventures and misadventures as he lives life always on the run.

View a synopsis of “Run, Toby, Run” on YouTube.