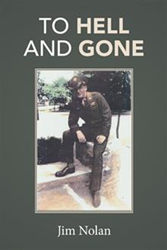 Born in the period of the ‘Roaring 20s,’ Jim Nolan has lived through the Great Depression and the greatest war in history. As an eyewitness to those historic times, he shares his tale in “To Hell and Gone” (published by Trafford Publishing).

Born to immigrants parents who, as teens, left their home and family to come to America as poor as poor can be, Nolan has witnessed the many hardships of life. He has the misfortune of his generation to experience the horrors of World War II. As a combat soldier during the war, he recounts the difficult journey he embarked on – shelled, bombed, machine gunned and shot at every step as he joined his brothers–in–arms press forward into woods, towns and mountains. Destined to be mortally or severely wounded according to the odds, Nolan was spared by the grace of God. He was honorably discharged from the army in 1946.

His experience in the military has a large impact into the man he became. It is his hope that readers will learn that there will be no end to wars. One goes to the battle ready for death. Only by being prepared mentally, physically and with a strong backbone will one achieve victory and not slavery. He started his own family carrying these lessons of yesteryears in his heart. Nolan also tells readers about his faith, which he dearly loves and tries to live with everyday.

A legacy to the future, “To Hell and Gone” gives readers a glimpse into the bygone years of what is hailed as the “historic era.” Through the eyes of one remarkable man, they will learn why people of that period are called the “greatest generation.” They will be given the chance to judge whether the author earned the right to that accolade.