Joan Coddington and Leo Railroad March’s new book “Thirteen Months of Orion” is a gripping spy thriller centered on a covert, anti-US unit within the ranks of the KGB.

Recent release “Thirteen Months of Orion” from Page Publishing authors Joan Coddington and Leo Railroad March is a spellbinding work of fiction painting a chilling portrait of the lengths to which the Soviet Union would go to destabilize and destroy the United States- their prime geopolitical adversary at the height of the Cold War. 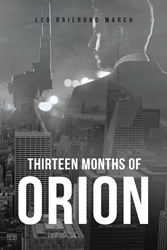 Joan Coddington, who was married to the late Leo Railroad March for forty years and now resides with her devoted pet, Rosie, in New England, has published their book “Thirteen Months of Orion”: a riveting spy thriller she coauthored with her husband in the 1980s and has chosen to publish their collaborations to honor his memory.

It was the early 1980s. The American hostages had just been released by Iran, the USA men’s ice hockey team upset the heavily favored Russians on the way to an improbable Olympic gold medal, and it was clear the United States was winning the Cold War on the world stage. In a desperate final bid to stir up tensions and hold on to power and relevance, the Orion Group, a rogue guard within the Soviet Union, puts in motion a plan designed to set the Cold War back thirty years. “Thirteen Months of Orion” is a spy thriller, which details the lengths to which the Orion Group was willing to go, and it has all the classic elements including international intrigue, beguiling espionage, and sex. These are all rolled into this spine-tingling prequel to the soon to be released “America: The Year 3000”.

Published by Page Publishing, Joan Coddington and Leo Railroad March’s engrossing book is a fast-paced thriller that keeps the pages turning until the stunning conclusion.

Readers who wish to experience this engaging work can purchase “Thirteen Months of Orion” at bookstores everywhere, or online at the Apple iTunes store, Amazon, Google Play, or Barnes and Noble.