The new Mays Landing facility features 48 short-term beds, 48 long-term beds and 24 detox beds for those suffering from substance use disorder. 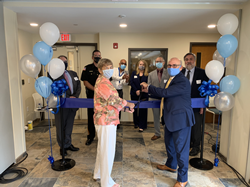 “This is a historic moment for John Brooks Recovery Center as we reflect on the progress that we have made over the last 50 years and focus on a hopeful future of helping even more individuals overcome substance use disorders,” said Santillo.

“This is a historic moment for John Brooks Recovery Center as we reflect on the progress that we have made over the last 50 years and focus on a hopeful future of helping even more individuals overcome substance use disorders,” said Santillo. “Our journey started in 1969 when John Brooks, an Atlantic City resident, former heroin addict and ex-con came to the realization that if he stopped using heroin, he’d stop going to prison. Shortly thereafter, he was inspired to start a small storefront outpatient program dedicated to helping individuals with substance use disorders.”

Originally called Narco, Inc., which later became the Institute for Human Development and eventually John Brooks Recovery Center, the nonprofit has since grown exponentially. “We now provide outpatient, intensive outpatient and opioid treatment with all three approved medications for the treatment of opioid use disorder, 120 long-term residential beds, a jail program providing medication-assisted treatment counseling and we have expanded that program to include recovery support services and care coordination both in the jail and when people leave the jail,” Santillo said. “We also have two recovery community centers providing a full array of recovery support services, a recovery housing program and a primary care clinic, in total serving as many as 1,200 individuals.”

JBRC’s new residential treatment facility will expand its current continuum of care allowing the organization to serve even more people. “This facility will allow us to further our mission to provide the highest quality, evidence-based treatment in state-of-the-art facilities through a recovery-oriented care model, integrating primary care, behavioral health and recovery support services,” Santillo said.

Harriet Weintrob, JBRC Board President, has been connected to the agency for the last 40 years. “I can tell you treatment works,” she said. “I have met so many people who have gone through the program and it is just so rewarding. I know John [Brooks] is looking down in utter amazement and he would be so delighted to see just how far we have come.”

Alan Oberman, former JBRC CEO, remained project manager for this new residential facility following his retirement in February. “When I came here in 2004, there were literally broken, boarded up windows in our buildings located in Atlantic City. I knew that the future of this agency was not in those buildings. Our principal idea was that people, regardless of their financial needs who were struggling to achieve recovery, should be in nice places. And I don’t want to feel embarrassed if I had to send a family member there. And, by a miracle, we are here.”

Among the countless supporters mentioned, JBRC paid special tribute to its staff, as well as former Governor Chris Christie, current Governor Phil Murphy, former State Senator Jim Whelan, NJHFFA, CRDA, TD Bank, KDA Architects and McDonald Building Company. “These were the people who were always behind me and never gave up,” said Oberman said. “Building this place was a team effort. This has been an unbelievable opportunity I have been given and I am very proud of what we have been able to accomplish here.”

Commissioner Johnson, a longtime advocate of JBRC, expressed that the opening of this facility is a testament to what the leadership of John Brooks really sees as the dignity and respect for the individuals it serves. “It is terrific to see the work we have done with John Brooks and the county in building models for medication-assisted treatment for the justice involved population,” she said. “The model built here [at John Brooks] in Atlantic County is something that we then went to the governor and worked with the legislature for additional funding for to mirror in towns across the state.”

Although it is unique to have a law enforcement officer at a treatment center, Sheriff Scheffler said it fills him with joy to partner with JBRC. “This is a beautiful facility and we are going to fill it up because my goal is to put 1,000 people into treatment off the streets in Atlantic County and we are definitely going to be a strong partner.”

During the ceremony, Assemblyman Armato presented JBRC with a proclamation from the NJ General Assembly in tribute to the nonprofit’s notorious efforts of its leaders and staff and extends sincere best wishes for continued success in all the years to come. “It started as a facility in 1969 and has grown into a model for the state and the country.”

“It took a lot to get here,” Santillo said. “And we are grateful to all those who came forward to provide us with funding to make this facility possible.

Mark Hopkins, Executive Director of the NJHCFFA, added, “to create a residential addiction facility for people who have too long been marginalized for the disease all too common is really heartwarming. For over 50 years, JBRC has quietly and selflessly given hope to the hopeless and saved thousands upon thousands of New Jersey lives as well as improved the quality of life to those who have received their services.”