John Buchweitz’s newly released “S.o.S I Am Stuck on Stupid!” is an awakening account that is meant to be a rebuke of what is taking place within God’s church

“S.o.S. I Am Stuck on Stupid!: Waking Up, Rising Up, Looking Up!” from Christian Faith Publishing author John Buchweitz is a contemporary novel that focuses on the author’s experience over the last twenty years in knowing Jesus Christ as everyone’s Lord and Savior. 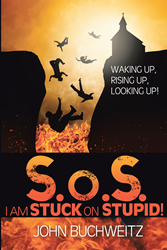 Buchweitz writes, “Over two thousand years ago, Pontius Pilate asked Jesus the question ‘What is truth?’ And today we have leaders who have been taken over by relativism; and when confronted with the truth, they state it’s someone else’s fault.

“The synagogue of Satan in Washington, DC, and all the temple prostitutes that surround and protect it continue to lure an ever-increasing populous into their lair. Relying on the people’s ignorance or lack of attention, the Great Deceiver spends millions of other people’s money (OPM) to perpetuate his lies by framing the narrative that we can trust him. Here are some questions for you:

“When will real Christians realize that it is unacceptable to have a government (or a church) that will borrow money with no expectation to pay it back?

“When will real Christians realize that any government (or church) that is not held to account is tyrannical?

“When will real Christians realize that there ‘is a road that leads to destruction’ and that having our ears tickled or being entertained will not take us off that road?

“History and the Bible has shown us that there is ‘nothing new under the sun’ and that we will continue to make the same mistakes until we decide to look to our heavenly Father for His will.”

Published by Christian Faith Publishing, John Buchweitz’s new book is a resounding reminder for the church of Jesus Christ to wake up concerning the people who represent the world.

With this purpose, Buchweitz tells the readers if anyone within the church just looks around at what is taking place in their immediate surroundings, their communities, states, country, and the world, everyone can realize their serious slide into a vacuum of no moral compass.

View a synopsis of “S.o.S. I Am Stuck on Stupid!: Waking Up, Rising Up, Looking Up!” on YouTube.

Consumers can purchase “S.o.S. I Am Stuck on Stupid!: Waking Up, Rising Up, Looking Up!” at traditional brick & mortar bookstores, or online at Amazon.com, Apple iTunes store, or Barnes and Noble.

For additional information or inquiries about “S.o.S I Am Stuck on Stupid!: Waking Up, Rising Up, Looking Up!,” contact the Christian Faith Publishing media department at 866-554-0919.