John Casperson’s new book “The Collapse of Truth" looks at the United States, as it is in a defining moment that will determine the future of the democratic experiment

Recent release from Page Publishing author John Casperson, “The Collapse of Truth" explores how the American political system has held a firm grasp on the concept of representational government until now. In Jonathan Swift’s brilliant political satire, Gulliver’s Travels, rope by rope, Gulliver was imprisoned albeit imperceptibly. 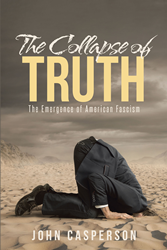 John Casperson, who has been a writer for seventeen years, has completed his new book “The Collapse of Truth": a riveting work that delves into how judge by judge, the judicial system has been co-opted by the right wing, and the Department of Justice under Bill Barr has become a politicized tool of the Executive Branch.

According to Casperson, “I traveled extensively to fifty-one countries on six continents. Each country has a history, each country has experienced prosperity and difficulty. I have lived and worked in Europe (Portugal and Germany) and have been privileged to experience life from the plains of Africa to Maxwell Street in Chicago. I have taken the pulse of societies and observed the best and the worst that people are capable of. I see in America of today a dynamic developing that is both disturbing and dangerous. In times such as these, politicians of the Republican Party and complicit media have chosen to disregard truth for power and profit in a headlong plunge toward fascism. This book documents the devil’s bargain that presently exists between the hard political right and fundamentalist Christians. I am terrified at what I see. I don’t have a PhD in sociology nor am I Margaret Mead, but I know this, truth is the basis for trust and a viable society. Truth is collapsing as I speak by those who have no regard whatsoever for truth. ‘Thou shalt not bear false witness’ applies only to everybody else.” It took World War II to rid the world of fascist leaders Mussolini and Hitler, hopefully the new fascism referred to as populist nationalism won’t require a war to eliminate Trumpism.

Additionally, the American free press is under attack like never before. This book is an analysis and exposè of forces at work that overtly and covertly are propelling America toward an authoritarian fascist state.

Readers who wish to experience this chilling work can purchase “The Collapse of Truth” at bookstores everywhere, or online at the Apple iTunes Store, Amazon, Google Play, or Barnes and Noble.

Page Publishing is a traditional, full-service publishing house that handles all the intricacies involved
in publishing its authors’ books, including distribution in the world’s largest retail outlets and royalty
generation. Page Publishing knows that authors need to be free to create, not mired in logistics like
eBook conversion, establishing wholesale accounts, insurance, shipping, taxes, and so on. Page’s
accomplished writers and publishing professionals allow authors to leave behind these complex and
time-consuming issues and focus on their passion: writing and creating. Learn more at
http://www.pagepublishing.com.