“A Glorious Day in Hell: The Day Jesus Descended into Hell” from Christian Faith Publishing author John Eudy is a rip-roaring story about a slain Roman soldier who finds himself in hell and is saved by Christ. 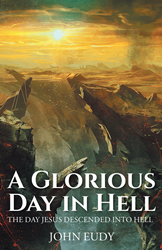 Eudy shares, “Our story unfolds in the pre-Christian era. A Roman soldier dies on a distant, dusty battlefield. Captured, chained, and humiliated in the afterlife, he suddenly finds himself being led by a band of demons to the first circle of hell. As he makes the arduous journey downward, he reflects upon his earthly life and his search for the truth of the one true God.

“He passes through the gates of hell and crosses the River Styx. He is taken to a demonic court where his sins are exposed and his placement in hell is determined. His captors then abandon him in the volcanic hellscape of limbo. There he languishes for a time, struggling to keep his hope alive. The soldier is granted glimpses of the Passion of the Christ before bearing witness to the glorious appearance of Jesus in hell after his crucifixion. Jesus rebukes Satan and silences hell; all bend their knee to him before he sets about the task of salving the just.

“The humble soldier is visited by Christ himself. He is redeemed by Jesus, healed, cleansed, clothed, and saved from the fires of hell. Escorted by an angel, the soldier is granted entry to paradise.”

Published by Christian Faith Publishing, John Eudy’s new book is a powerful depiction of Christ’s saving grace for all sinners upon his descent to hell in his death on the cross.

This book unveils the Lord’s unbound compassion for the lost and sinful through the sacrifice of his Son, Jesus Christ, fulfilled on the cross for the atonement of all sins.

View the synopsis of “A Glorious Day in Hell: The Day Jesus Descended into Hell” on YouTube.

Consumers can purchase “A Glorious Day in Hell: The Day Jesus Descended into Hell” at traditional brick-and-mortar bookstores or online at Amazon.com, Apple iTunes store, or Barnes and Noble.

For additional information or inquiries about “A Glorious Day in Hell: The Day Jesus Descended into Hell,” contact the Christian Faith Publishing media department at 866-554-0919.