“Guardian of the Lightning Seeds” from Christian Faith Publishing author John Eudy is an action-packed tale of adventure and intrigue with a mix of old-fashioned fairy tale energy. 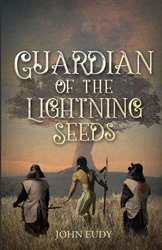 “Guardian of the Lightning Seeds”: an engaging tale of faith and perseverance. “Guardian of the Lightning Seeds” is the creation of published author John Eudy, a loving husband and devoted father who served with the armed forces for twenty-six years before leaving to pursue a career in human resources. He has since officially retired to become a stay-at-home dad to his two beloved daughters.

Eudy shares, “Long before the Spanish explore the American West, God entrusts lightning seeds from the fabled tree of life to a noble Native American tribe. They keep the seeds safe in Mesa Verde for several generations until a fierce skinwalker steals them. In the aftermath, the chief’s fifteen-year-old son, Notah, is sent by an angel to retrieve the seeds. He must leave his home and travel across the desert southwest to Death Valley where the skinwalker has hidden the seeds in the ancient underground city of Shin-au-av. He must complete this quest before the moon is full lest the devil claims the seeds for his own malevolent use.

“The young brave travels with a unique band of Japanese warriors, the Hotaru-Raikō. Part human and part lightning bug, they are unlike anything Notah has ever seen in nature. Can these two cultures, steeped in the way of the warrior, come together in the service of God? Can they complete the journey, defeat monstrous creatures, and escape the ancient city with the seeds? Will Notah ever be able to return to his nomadic tribe and restore the lightning seeds to their rightful place?”

Published by Christian Faith Publishing, John Eudy’s new book takes readers on a journey through seemingly insurmountable odds with some of the most heroic warriors Notah has ever met.

Eudy paints a compelling picture for the delight of readers’ imaginations within the pages of this creative tale.

Consumers can purchase “Guardian of the Lightning Seeds” at traditional brick & mortar bookstores, or online at Amazon.com, Apple iTunes store, or Barnes and Noble.

For additional information or inquiries about “Guardian of the Lightning Seeds,” contact the Christian Faith Publishing media department at 866-554-0919.