John Leguizamo to Host the 26th Annual Audie Awards®, the Most Prestigious Awards in Audiobook and Spoken Word Entertainment

Award-winning actor, stand-up comedian, producer, writer, and audio narrator John Leguizamo will emcee the 2021 Audie Awards®, the most prestigious awards in audiobook and spoken word entertainment. The Audie Awards® Gala will be held virtually on March 22, 2021, available to the public via livestream on http://www.audiopub.org. Bestselling authors Jerry Craft, Melissa de la Cruz, Jennifer Egan, Tommy Orange, V.E. Schwab, and David Sedaris to judge Best Young Adult and Audiobook of the Year. The Audie Awards® is the premier awards program in the United States recognizing distinction in audiobooks and spoken-word entertainment. 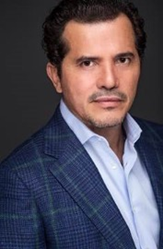 "I can’t wait to honor this evolving art form. In a year that’s been so turbulent, it feels good to pay tribute to the artists who helped us still feel human in an era of social-distancing and self-isolation." - John Leguizamo, host of the 2021 Audie Awards®

The Audio Publishers Association (APA) announced today that award-winning actor, stand-up comedian, producer, writer, and audio narrator John Leguizamo will emcee the 2021 Audie Awards®, the most prestigious awards in audiobook and spoken word entertainment. The Audie Awards® Gala will be held virtually on March 22, 2021, available to the public via livestream on http://www.audiopub.org.

Mr. Leguizamo said: "I am beyond excited to be emceeing the 2021 Audie Awards®. As someone who loves exploring new mediums in which to express myself, I can’t wait to honor this evolving art form. In a year that’s been so turbulent, it feels good to pay tribute to the artists who helped us still feel human in an era of social-distancing and self-isolation."

“As audio publishing reaches new heights of popularity and creativity, we are thrilled for our evening to be in the skillful hands of the multi-talented John Leguizamo,” said Michele Cobb, Executive Director of the APA. “John’s own audio productions demonstrate the kind of exciting work happening in the medium. We look forward to celebrating the quality and unique visions of an exciting group of finalists.”

Audiobook listening continues to surge, with eight years in a row of double-digit revenue growth and more titles produced in 2020 than ever before. This year’s awards will include winners in 25 competitive categories. The APA received a record-breaking 1,528 entries, representing over 14,000 hours of audio narration to be judged.

The APA is honored to have a group of esteemed authors serving as judges for two important awards: Jerry Craft, Melissa de la Cruz, and V.E. Schwab will judge the Audie Award® for Young Adult; and Jennifer Egan, Tommy Orange, and David Sedaris will judge Audiobook of the Year. The judges will also participate in the Audie Awards ceremony.

In late February, the APA will announce the full list of Audie Award® finalists.

A multi-faceted performer and Emmy Award winner, John Leguizamo has established a career that defies categorization. With boundless and visceral creativity, his work in film, theatre, television, and literature covers a variety of genres, continually threatening to create a few of its own.

John currently stars in the Amazon series THE POWER, opposite Leslie Mann, and can most recently be seen in the Paramount comedy feature PLAYING WITH FIRE alongside Keegan-Michael Key and John Cena. He can next be seen starring in Barry Levinson’s upcoming feature HARRY HAFT alongside Danny DeVito and Ben Foster.

He has previously been seen in THE INFILTRATOR opposite Bryan Cranston for Broad Green Pictures, the Universal Pictures feature SISTERS, opposite Tina Fey and Amy Poehler; the Lionsgate action comedy AMERICAN ULTRA with Jesse Eisenberg and Kristen Stewart, and Atlas Independent’s THE HOLLOW POINT opposite Patrick Wilson and Jim Belushi.

Leguizamo has also starred alongside writer/director Jon Favreau in the Open Road feature CHEF, and in the Universal Pictures breakout comedy hit RIDE ALONG opposite Ice Cube and Kevin Hart.

In addition, John starred in the third season of Netflix’s critically acclaimed, Emmy nominated series BLOODLINE, in which he played the role of “Ozzy Delvecchio” alongside Kyle Chandler, Ben Mendelsohn, Linda Cardellini, and Chloe Sevigny. Other television credits include Paramount Network’s WACO, for which he was nominated for an Emmy for Best Supporting Actor in a Limited Series.

LATIN HISTORY FOR MORONS was adapted by Audible Originals from Leguizamo’s wildly successful Broadway show of the same name.

He also reprised his role of “Aurelio” in JOHN WICK 2 opposite Keanu Reeves, Ian McShane and Common.

Audiobook of the Year Judges

Jennifer Egan — Jennifer Egan is the author of several novels and a short story collection. Her most recent novel, Manhattan Beach, a New York Times bestseller, was awarded the 2018 Andrew Carnegie Medal for Excellence in Fiction, and was chosen as New York City’s One Book One New York read. Her previous novel, A Visit from the Goon Squad, won the 2011 Pulitzer Prize, the National Book Critics Circle Award, the Los Angeles Times book prize, and was recently named one of the best books of the decade by Time magazine, Entertainment Weekly, and several others. Also a journalist, she has written frequently in the New York Times Magazine. She recently completed a term as President of PEN America.

Tommy Orange – Tommy Orange’s There There is a national bestseller that won the PEN/Hemingway Award, the National Book Critics Circle John Leonard Prize, the Center for Fiction First Novel Prize, and the American Book Award. It was also a Pulitzer Prize finalist. The audiobook for There There was a 2019 Audie Award® finalist (Multi-Voiced Performance). Tommy Orange is an enrolled member of the Cheyenne and Arapaho Tribes of Oklahoma, and was born and raised in Oakland, California.

David Sedaris - David Sedaris is the author of Calypso, Theft by Finding, Let’s Explore Diabetes with Owls, Squirrel Seeks Chipmunk, When You Are Engulfed in Flames, Dress Your Family in Corduroy and Denim, Me Talk Pretty One Day, Holidays on Ice, Naked, and Barrel Fever. He is a regular contributor to The New Yorker and BBC Radio 4. Sedaris has been an Audie Awards® finalist 17 times (in various categories) and won the award four times. He lives in England and is a member of the American Academy of Arts and Letters.

Jerry Craft – Jerry Craft is the New York Times bestselling author and illustrator of New Kid, winner of the 2020 John Newbery Medal for the most outstanding contribution to children’s literature; it was also a 2020 Audie Award® finalist (Middle Grade category). In addition, New Kid was awarded the Kirkus Prize for Young Readers’ Literature and Jerry was awarded the Coretta Scott King Author Award for the most outstanding work by an African American writer.

Melissa de la Cruz - Melissa de la Cruz is the #1 New York Times, #1 Publisher’s Weekly and #1 IndieBound bestselling author of many critically acclaimed and award-winning novels for readers of all ages. Her books have topped USA Today, Wall Street Journal and Los Angeles Times bestseller lists and have been published in more than thirty countries. She has sold over ten million books and is best-known for her many series including Blue Bloods, Disney’s Descendants, Alex & Eliza, Never After: The Thirteenth Fairy and Witches of East End which was turned into a television series on Lifetime. Melissa de la Cruz lives in West Hollywood with her husband and daughter.

V.E. Schwab — Victoria “V.E.” Schwab is the #1 New York Times bestselling author of more than twenty books, including the internationally acclaimed Shades of Magic series, the Villains series, the Cassidy Blake series and more. Her latest novel, The Invisible Life of Addie LaRue, is set to be adapted into a feature film by eOne and First Kill – a YA vampire series based on Schwab’s short story – is set to hit Netflix, produced by Emma Roberts’ Belletrist Productions. When she's not haunting Paris streets or trudging up English hillsides, she lives in Edinburgh, Scotland, and is usually tucked in the corner of a coffee shop, dreaming up monsters. Her newest book, The Invisible Life of Addie LaRue, follows the title character across centuries and continents, across history and art, as she learns how far she will go to leave her mark on the world.

The Audie Awards® is the premier awards program in the United States recognizing distinction in audiobooks and spoken-word entertainment. Publishers and rights holders enter titles in various categories for recognition of achievement. Finalists are selected, and from that group of finalists one winner is awarded. The Audie Awards® is a registered trademark of the Audio Publishers Association.

ABOUT THE APA The Audio Publishers Association (APA) is a not-for-profit trade organization whose primary goals are to promote awareness of the audiobook industry, gather and disseminate industry statistics, encourage high production standards and represent the interests of audiobook publishers. Since 1986, the APA has worked to bring audio publishers together to increase interest in audiobooks. For more information on attending The Audies, visit https://www.audiopub.org/members/audies.