John Murillo won the $100,000 award for his latest collection, 'Kontemporary Amerikan Poetry'; Jake Skeets received $10,000 as the winner of the Kate Tufts Discovery Award for his book 'Eyes Bottle Dark With a Mouthful of Flowers' 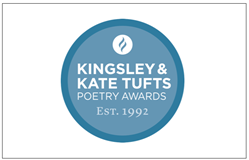 Murillo and Skeets's poetry speaks boldly and poignantly about the human condition in ways that transcend particular places or individual experiences.(Lori Anne Ferrell, director of the awards)

Chosen annually, the Kingsley award—which is one of the largest annual awards in contemporary poetry—provides $100,000 for a book by a mid-career poet; the Discovery award honors a book by a poet of promise with $10,000.

The selection of this year’s winners was announced during a traditional call-the-winner event hosted every spring by Claremont Graduate University (CGU).

Due to quarantine restrictions, the event, which is typically held in person at the home of CGU President Len Jessup, was shifted to an online format. Attendees watched online as the two winners were called and notified about their selection.

Finalist Judging Chair Timothy Donnelly, who won the Kingsley in 2012 for "The Cloud Corporation," gave the good news to this year’s winners.

Donnelly praised Murillo’s "Kontemporary Amerikan Poetry'"(a collection that examines the brutal legacy of racial injustice) for making traditional poetic forms like blank verse “feel as relevant for us today as Frost did for his time—and we applaud that nothing about the book feels rushed. It is a deeply considered, impeccably selective, resonant, radiant book.”

Donnelly singled out Murillo’s poem “On Confessionalism” and the tragic sonnet sequence “Delores, Maybe” for their perfect execution. “On Prosody” he called “a tour-de-force that takes Robert Frost’s observation that ‘The best place to get the abstract sound of sense is from voices behind a door’ to places he probably didn’t foresee.”

Murillo is an assistant professor of English at Wesleyan University and a past recipient of a Pushcart Prize and the J. Howard and Barbara MJ Wood Prize from the Poetry Foundation as well as fellowships from the National Endowment for the Arts and the Bread Loaf Writers Conference, among others.

For the Kate Tufts Discovery Award, the judges chose Skeets’s collection because, as Donnelly told him, “we are in awe of this book of yours. Knocked flat. We are humbled by the care and the candor with which it bears witness to what it means to come of age in the ‘Indian Capital of the World.’ The hardships, the hazards, the resilience, and the refusal not to find beauty wherever it can still be found.”

A recipient of a 92Y Discovery Prize, a Mellon Projecting All Voices Fellowship, an American Book Award, and a Whiting Award, Skeets described his prize-winning poetry collection as “a project of reclamation for me, and for this picture, and the history that went behind it.”

The picture he referred to is a cover photo of his late uncle, Benson, taken by Richard Avedon in 1979 as part of a series of portraits about the American West.

The circumstances behind the photo—and the exchanges Avedon had with Benson about it—were lost to the family when, a year after the photo was taken, Benson was stabbed to death. "Eyes Bottle Dark with a Mouthful of Flowers" is Skeets’s poignant response to that loss.

This year’s awards are notable for their attention to small independent presses—all of this year’s finalists (including the winners) are published by the indies—and for an unexpectedly regional angle that ties the winners with Claremont and the Southwest.

Skeets is from the Navajo Nation and teaches at Diné College in Tsaile, Arizona. At the same time, Murillo, a Brooklyn resident, grew up not far from the Claremont Graduate University in Ontario, attended high school there and in Alta Loma, and has family in Pomona.

“It’s striking and, I think, significant that both of this year’s winners are connected with our region in some way,” said Lori Anne Ferrell, dean of CGU’s School of the Arts & Humanities and director of the awards. “They might be regional in terms of their backgrounds, but, still, their poetry speaks boldly and poignantly about the human condition in ways that transcend particular places or individual experiences.”

About the Kingsley & Kate Tufts Poetry Awards
One of the world’s most prestigious poetry awards, the Kingsley Tufts Award was started at CGU in 1992 by Kate Tufts to honor her late husband, Kingsley, who held various executive positions in L.A.-area shipyards and wrote and published poetry. It was followed a year later by the establishing of the Kate Tufts Discovery Award. Past Kingsley Tufts Award recipients include Patricia Smith, Vievee Francis, Angie Estes, Afaa Michael Weaver, D.A. Powell, B.H. Fairchild, Thomas Lux, Henri Cole, and Linda Gregerson; past recipients of the Kate Tufts Discovery Award include Yona Harvey, Charles Harper Webb, and Lucia Perillo.