Recent release, “Between Iraq and a Hard Place” from Page Publishing author John Norman describes how he worked as a civilian contractor for close to a year directly for the Revolutionary Command Council, leading a team of Western technicians to modernize banking in Iraq. On the day of the Kuwait invasion, the author, along with hundreds of others were taken hostage as collateral by the Iraqi government. 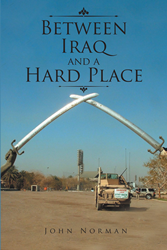 John Norman, who has built, rehabilitated, and modernized banks and financial institutions all over the world, has completed his new book “Between Iraq and a Hard Place”: an intriguing story about Norman's leading an escape across two deserts and arriving five days later to safety in Jordan.

Norman shares, “On August 2, 1990, Saddam Hussein launched an invasion of Kuwait that ransacked the country, killed scores of innocent people, and destroyed the country’s petroleum infrastructure. Eventually bringing together an allied coalition to turn back Saddam’s forces and free Kuwait. But how many people actually know the events occurring in Iraq in the year preceding the invasion from inside the ruling party?”

Published by New York City-based Page Publishing, John Norman’s riveting, real-life tale of what life was like for a then peace-loving people, the regime and how it operated, the betrayals, the “Super Gun”, Uday Hussein, the gassing of the Kurds at Halabja, the WMD and the destruction of this stockpile by the US military that caused Gulf War syndrome, and the after effects on our troops which the US government denied for years and years.

Norman never returned to Iraq after his escape, but shortly after Desert Storm he did go to perform a similar assignment in the Kingdom of Saudi Arabia while the oil wells were still on fire in the desert. There, he was also an “insider” to the workings of the government, the attempt to recover the stolen gold, the corruption in the ruling family, the hypocrisy of the country, and the plight of the Palestinian people working and living in the kingdom for backing Iraq in its war with the allies.

Although Norman waited a quarter of a century to publish this book for fear of retribution for the material in it, he hopes this story sheds light on a war and the destruction of a nation and its people that really did not have to be fought at all.

Readers who wish to experience this thrilling story can purchase “Between Iraq and a Hard Place” at bookstores everywhere, or online at the Apple iTunes store, Amazon, Google Play or Barnes and Noble.