“Yea, Has God Said…?” from Christian Faith Publishing author John O. Grimley brings a detailed study of the Scriptures that holds the answers to the questions concerning the Bible, creation, salvation, life, death, and more that is there in between. 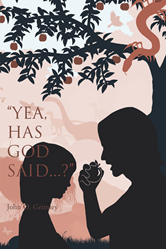 “Yea, Has God Said…?”: an important tool that brings answers to some of mankind’s questions revolving around the written word. “Yea, Has God Said…?” is the creation of published author John O. Grimley, a man who is now semiretired and is an avid fan of the sport of pickleball. He is employed by the Ray & Joan Kroc Corps Community Center (The Salvation Army). He is available to speak and teach at churches, fellowships, Sunday Schools, as well as to audiences both in the religious and public sector.

Grimley shares, “Throughout one’s life, from its beginning to its end, one is constantly bombarded with ‘spin’ by those who desire to promote products and push ideas, philosophies, and a multitude of faiths whether religious or secular. There is only one work, even since the beginning of time, which is free of ‘spin’ and tells it exactly as it was and is now: God’s inspired Word, the Bible.

“Right from the very beginning, Eve put three ‘spins’ on what God had told Adam. She deleted the word ‘freely,’ she added the phrase, ‘neither shall you touch it,’ and altered the word ‘surely’ to ‘less.’ Yet it was Lucifer, the fallen archangel in the guise of a serpent who put into motion the ultimate ‘spin’ on God’s word: ‘Yea, has God said…?’ From then on, this question has played havoc with every society down through the ages. Any question of doubt concerning God’s word always opposes truth and reality.

“This book has been written to put forth a definitive answer to this insidious question. In fact, this question begs for an answer and not just a rhetorical one. The questions raised concerning God’s word itself, creation, salvation, eschatology, morality, death, and more are in this book and are answered with a resounding: ‘Yes, God has said!’”

Published by Christian Faith Publishing, John O. Grimley’s new book is a compelling guide for the readers that will bring clarity to their minds as they become illuminated with understanding of what has been written in the bible.

View a synopsis of “Yea, Has God Said…?” on YouTube.

Consumers can purchase “Yea, Has God Said…?” at traditional brick & mortar bookstores, or online at Amazon.com, Apple iTunes store, or Barnes and Noble.

For additional information or inquiries about “Yea, Has God Said…?,” contact the Christian Faith Publishing media department at 866-554-0919