“Angel Performing Miracles” from Christian Faith Publishing author John Paul Carinci is an enticing story of an angel-in-training who goes back to Earth to endorse his miracles to reckon. 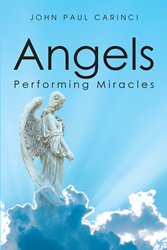 “Angels Performing Miracles”: an impelling treatise that will take the readers on an unforgettable journey in seeking life-changing answers to their life’s questions. “Angels Performing Miracles” is the creation of published author John Paul Carinci, a published author and screenwriter who released a variety of books and adaptations of some of his novels. He is also a motivational speaker who appeared in over a hundred radio and TV interviews across the globe.

Carinci writes, “Angels Performing Miracles is the sequel to There’s an Angel Inside of Me. Ryan Simmons, now in the hereafter, and as an angel in training, is monitored, once again, by Theodore the Guardian Angel.

“Ryan, though still not eligible for heaven, is assigned to watch his reissued soul, Paul Ryan, on earth. Paul, the new soul is allowed to recommend to the guardian angel, drastic life-changing events on earth, miracles. But what will he recommend, and why? And what is the hereafter all about, anyway?

“Questions will be asked: Why are terrible things on earth allowed to remain unchanged? And is it all really revolving around: free will.

“With so many questions for Ryan, the new soul, Paul and us, Ryan, finally is allowed something very special. He is allowed just forty-eight hours back on earth, to recommend his own miracles to be considered.

“What will they be, and why? Will they be allowed or declined by God? And what are the reasons God will allow or disallow Ryan’s urgent miracle requests?

“You will feel what Ryan feels as he travels the earth looking for miracles we all may want to choose. Hold on tight as the assignment begins.”

Published by Christian Faith Publishing, John Paul Carinci’s new book is a captivating narrative of an angel’s assignment for him to be able to enter the Kingdom of God after his task of forty-eight hours on Earth.

With this book, the author provides a gleaming light to the readers for them to be enlightened and understand the things happening on Earth and the major gift of God—free will.

View a synopsis of “Angels Performing Miracles” on YouTube.