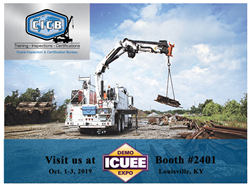 CICB’s team of Safety Advisors will focus on assisting attendees with assessing, planning and implementing training and safety programs.

Attendees at this year’s International Construction & Utility Equipment Exposition (ICUEE) will have plenty of reasons to stop by Booth 2014 on October 1-3 in Louisville, KY. Safety Advisors from Crane Inspection & Certification Bureau’s (CICB) will be there to provide comprehensive insight into OSHA’s requirements, including the final personnel qualification crane rule published last November.

Articulating cranes, also known as knuckle boom cranes, primarily known for material delivery, have gradually been adopted to perform tasks that were previously handled by telescopic boom mobile cranes. “The many tasks that articulating cranes are being used for has led to some confusion as to if the operators are required to be certified under OSHA 1926 Subpart CC” said Shawn Khan, CICB’s Senior Safety Advisor. OSHA defines construction as “work for construction, alteration, and/or repair, including painting and decorating.” The delivery of construction materials is typically classified as “general industry,” but, if a crane facilitates a construction activity while delivering materials, then that is considered “construction” and OSHA 29 CFR Subpart CC rules apply.

According to data released by the National Commission for the Certification of Crane Operators (NCCCO), demand for knuckle boom certification in 2018 was up by 28 percent compared with the previous year. This followed a massive 96 percent surge from 2016 to 2017.

About CICB:
Headquartered in Orlando, FL since 1969 with a second training facility in Houston, TX, Crane Inspection & Certification Bureau (CICB) provides customized training for every type of lifting equipment and inspection services worldwide.