Conservative Jonathan Wichmann initiated his campaign in April 2020 in momentum for the 2022 election. 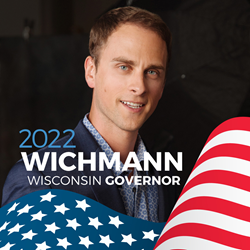 The Wisconsin people deserve better than what they’ve been getting from our elected officials, and I’m excited to be the candidate that the people can trust to create a better future for everyone.

Jonathan Wichmann officially declared his candidacy for Wisconsin governor in the 2022 election. The Republican candidate is confident in his efforts to defeat the current Governor, whose controversial COVID-19 restrictions and handling of civil unrest in Kenosha sparked calls for a recall election and demands for the Governor’s resignation.

“The Wisconsin people deserve better than what they’ve been getting from our elected officials, and I’m excited to be the candidate that the people can trust to create a better future for everyone,” an energized Wichmann said.

Residents of Wisconsin openly criticized the Governor for prolonged shutdowns, delayed unemployment benefits, draconian restrictions on small businesses, and delayed reactions to civil unrest and riots in Kenosha, Wisconsin that left two people dead. Wichmann visited Kenosha in the aftermath of the riots, meeting with small business owners and residents who were impacted by the destruction and inaction by the governor.

“I want to restore civility, peace, medical freedoms and economic success for all of us. Together, I know we can save Wisconsin.”

As a public advocate for the people of Wisconsin, Wichmann recently appeared as a guest speaker at a Racine rally calling for Wisconsin schools to be opened. He has also made numerous calls for churches to open for in-person worship.

Wichmann hopes to put an end to the nonsensical, ineffective policies and government overreach seen in the current administration’s office. “I have a detailed plan to strengthen our economy, and when I’m in office, the people can count on me to protect them and their freedoms. It’s time for a return to prosperity and productivity.”

Furthermore, Wichmann has been an influential force behind the push to pass the original text of WI AB1, a legislative bill that would protect residents from forced, mandatory vaccines, which some lawmakers are pushing to enact as a result of the COVID-19 virus. Wichmann also seeks to end a forced statewide mask mandate and prohibit DHS from threatening fines and revoking business licenses.

Wichmann’s forward-looking campaign is focused on getting children back in schools, sparking economic prosperity through the growth of small businesses, agriculture, and supporting veterans, law enforcement, and all first responders.

Learn more about Wichmann and his campaign to be the next governor of Wisconsin by visiting http://www.wichmannforgovernor.com and Facebook.com/votewichmann. Follow our campaign across most social media platforms by using the handle @votewichmann.