JONY, a Waterloo based singer, songwriter and producer has been chosen as the #1 singer/songwriter by ReverbNation. 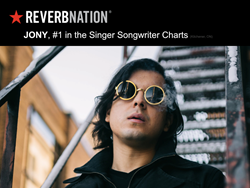 JONY was amazing to work with, not only did he save us by working his magic on our voices and sound, he turned the whole experience into a blast. I’d highly recommend him and hope to use his services again in the future.

JONY, a Waterloo based singer, songwriter and producer has been chosen as the #1 singer/songwriter by ReverbNation.

ReverbNation is a platform that connects artists to venues, festivals, brands, publishers, labels, and fans. ReverbNation’s current user base sits at over four million artists located in more than 100 countries. The company was founded in 2006, and is headquartered in North Carolina.

JONY (also known as Jonathan Mansilla) began his music career in middle school, picking up the guitar and composing original songs at age thirteen. Since then, he’s sown the seeds to a promising name in the industry. He became a John Lennon Songwriting Competition finalist for his song “I Can’t Wait” off his EP of the same title. JONY has played in venues across Canada and the United States, climbing his way to the title of #1 Singer/Songwriter on ReverbNation (Kitchener). He also was a finalist in the SOCAN Canadian Songwriting Competition for his tune “Beep Bop Bow”.

JONY’s music as a solo artist has explored different genres from country to rap, but has always kept the underlying feel of a primarily indie-rock musician. JONY composed and produced “Cot Dammit Elizabeth”, inspired by the social media mogul Ekow Fynn (creator of the viral Cot Dammit Elizabeth videos). Fynn was impressed by the 90’s style rap song, which featured a music video depicting both Wilfred Laurier University and the University of Waterloo, and shared it, exposing JONY to his audience of over 4 million people. After releasing his latest track “I Can’t Say ILY”, he has continued to rise in popularity over several social media/streaming platforms.

JONY took the reins when he decided to create and release one single every month in various genres to expand his production and songwriting skills. This led to him opening his own recording studio under the name JONY STUDIOS. His company has a clientele base ranging from local musicians to tech companies residing in the growing community of start-ups in the KW region.

Learn more about JONY, in his feature on Spoke Online Here. The article takes a deep look into his life in the recording/audio space, from where his creative journey started, to taking the leap into opening up his own recording studio and everything in-between.

The company has clients that range from musicians to technology companies.
Respecting the Process, a media/marketing company in Kitchener, has worked with JONY STUDIOS on multiple occasions.

JONY has also worked with Marc Lafleur, CEO of truLOCAL, an online tech company that connects people to high-end and locally sourced meat products. Lafleur said the services JONY offers are above and beyond.

“JONY was amazing to work with, not only did he save us by working his magic on our voices and sound, he turned the whole experience into a blast. I’d highly recommend him and hope to use his services again in the future.”