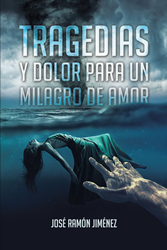 Jiménez shares, “This is a story of three generations that are involved in tragedy of suffering and pain to become everything in progress and love. It all began as a joy, and joy turned into a hell of bad luck for them and their descendants. They died in a car accident but left a daughter who was the beginning of the second generation, and her name was Martha. She was put in an adoption house, and she was adopted twice, ending up growing up in an institution of orphaned and abandoned children. She was raped by the institution's cook when she was fourteen. She then had a child of that rape, and the cook, being discovered, hanged himself. She died in the hospital of complications from her previous pregnancy. Then the child at birth came, being the third generation. The director of that institution hated both Martha and her son.

“But the principal, when Martha died, the diagnosis she was given of her death did not please her. The principal put the institution's attorney to handle the case. And the quick lawyer acted, finding the real reason and suing the hospital for a hefty sum of money. Then the director who was selfish and ambitious thought she was going to enjoy that money. But the judge put the money in a bank account by the time the child is of legal age. The boy escaped from the institution at the age of twelve. And if you want to know all the other existing scenes that happened over the course of the book, you'll have to read the book.”

Published by Christian Faith Publishing, José Ramón Jiménez’s new book shows the capriciousness of life that builds and destroys sanity as well as define the character in every human being.