“Ovarian Cancer Alert” from Christian Faith Publishing author Joseph C.E. Warnes is a masterful account that provides facts to the readers for them to be able to know and be aware of its early symptoms. 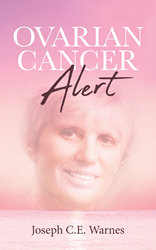 “Ovarian Cancer Alert”: a masterful account that raises the awareness of this kind of ailment and also gives the readers enough knowledge on how to avoid and detect it. “Ovarian Cancer Alert” is the creation of published author Joseph C.E. Warnes, a writer who is a fellow of the Precast/Prestressed Concrete Institute and former member of the American Society of Civil Engineers and the Concrete Reinforcing Steel Institute.

Warnes writes, “In the United States, one woman on average is diagnosed with ovarian cancer every twenty minutes. An American woman dies every thirty-six minutes daily as a result of this disease. Extrapolated to a world population basis, that projects to one ovarian cancer death somewhere on earth about every two to four minutes, about five hundred a day, and around 175,000 each year.

“You, the victim are quite likely to be the first person to experience the early symptoms of ovarian cancer, even before your doctor becomes aware of a problem. Statistically, approximately sixty American women are discovered daily with ovarian cancer. Around forty of those will die every day.

“This book describes early signs that should never be ignored.”

Published by Christian Faith Publishing, Warnes’s new book shares a resounding reminder to the readers enabling them to know how and where this disease is come from.

With this purpose, the author prompts the readers to be more aware of the early symptoms of this rising case in the United States.

View a synopsis of “Ovarian Cancer Alert” on YouTube.