Joseph L. Marshall’s newly released “Lilly and The Angel: The Story of Snuggle Bug” is about a bitter Angel paired with a rude six-year-old in an outrageous adventure

“Lilly and The Angel: Volume 1: The Story of Snuggle Bug” from Christian Faith Publishing author Joseph L. Marshall is a story about a demoted Angel who is assigned to a foul-tempered six-year-old as they embark on an outrageous adventure. 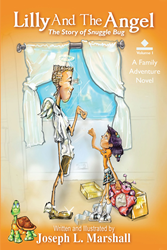 Marshall shares, “Angels with attitudes and sucky six-year-olds—the world needs more of them!”

“Meet Lilly Faithe Christians, a defiant, foul-tempered six-year-old girl with a personality well beyond her years. Meet Corinthian Angel Creation Of God—an immature, blemished, illegitimate angel with highly exaggerated hopes of becoming part of the elite Guardian Angel infantry. These two beings are messed up and in need of a serious intervention!

“Their outrageous adventure begins when an untimely tantrum from Lilly proves to be the last straw for her mother, Faithe Christians, who decides to place Lilly on punishment for an entire week. Forced to remain in her room, Lilly must learn to correct her bad behavior in order to be freed from punishment.

“Just above her in the second heaven, the frustrated and unfulfilled Corinthian Angel Creation Of God, a.k.a. Cori, has been demoted and stripped of his angelic wings because of an ancient assignment gone awry several centuries ago. Corinthian, now forced to flounce around the heavens with a shamefully puny pair of wings, is sentenced to living throughout eternity with the stigma of his sullied track record.

“But fear not! God always has a plan to make right what has gone wrong. And God’s eternal plan for Lilly and Corinthian means colliding their worlds together for a chance at redeeming both their unsavory behaviors.

“Together, Lilly and Corinthian must let go of their hang-ups and prejudices in order to work as a team, for the sake of waging war against several evil spirits lurking inside of Lilly—as each new foe proves more challenging than the last. These beasts are serious! Corinthian and Lilly must get past their differences and trust in themselves, each other, and the Most High if they’re ever to have a chance at the liberation, the validation, and peace they both so desperately yet so secretly desire.

“A rude angel with a serious distaste for humans, an unmannerly six-year-old girl with an attitude larger than the city in which she lives—this could either be a recipe for disaster or the very ingredients for a miracle!”

View a synopsis of “Lilly and The Angel: Volume 1: The Story of Snuggle Bug” on YouTube.

Consumers can purchase “Lilly and The Angel: Volume 1: The Story of Snuggle Bug” at traditional brick & mortar bookstores, or online at Amazon.com, Apple iTunes store, or Barnes and Noble.

For additional information or inquiries about “Lilly and The Angel: Volume 1: The Story of Snuggle Bug,” contact the Christian Faith Publishing media department at 866-554-0919.