Joseph Nnodim’s book “Toward Understanding the Nigeria-Biafra War and Lingering Questions” is a history of Nigeria during the colonial and immediate post-colonial eras.

Recent release “Toward Understanding the Nigeria-Biafra War and Lingering Questions” from Page Publishing author Joseph Nnodim is a well-researched chronicle of modern Nigeria and the repercussions of colonialism, deep ethnic tensions, and catastrophic civil war that persist to this day. 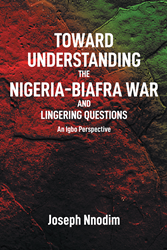 Joseph Nnodim, a father, grandfather, and Fellow of the American College of Physicians and the American Geriatrics Society who was born in Aba, Nigeria, attended medical school in Lagos as well as advanced studies in the United Kingdom and Switzerland, and emigrated to the United States to take a position at the University of Michigan in Ann Arbor, where he now lives with his wife, has completed his new book “Toward Understanding the Nigeria-Biafra War and Lingering Questions”: a heartbreaking history of a modern nation.

“Toward Understanding the Nigeria-Biafra War and Lingering Questions” is a thought-provoking account of the British engagement with the peoples of the lower Niger river basin which resulted in the fabrication of a Nigerian state under insincere and contrived premises. The myriad ethnic groups shared nothing cherishable and never managed to find commonality of purpose or civic principle, no small thanks to colonial policies predicated on divide et impera. As a result, the indigenous political class was bequeathed a toxic legacy of interethnic suspicion, incoherence, and disharmony at independence in 1960. Crisis followed crisis, until the armed forces intervened and the First Republic collapsed in 1966. A further cascade of tragic events, including the mass slaughter of people of the East, caused that region to proclaim itself the independent sovereign Republic of Biafra in 1967. A civil war ensued, and the critical developments during the crucial combat period are exhaustively chronicled.

The Biafran capital, Enugu, fell after three months of bitter fighting. A war of attrition followed, lasting twenty-seven more months, during which at least one million babies and children succumbed to inanition. The Nigeria-Biafra War stands out ignominiously as one of the very rare conflicts in modern history in which one of the belligerents overtly declared its intention to starve its adversary into submission and clung to that policy even when it became abundantly clear that the victims were predominantly babies. No proper accounting has been demanded or given.

The Igbo were the largest of the ethnic groups in the Republic of Biafra. They had been in the vanguard of the struggle for Nigeria’s independence and unity but paradoxically became the whipping boy in the postcolonial era when the country lost its collective mind. They were subjected to untold savagery before as well as during the civil war, whose repercussions they continue to suffer to the present day. Their ethnography is explored in the context of both the conflict and the entirety of their Nigerian experience.

Published by Page Publishing, Joseph Nnodim’s engrossing book is an invaluable resource for readers interested in the history of Nigeria and the Igbo people from the colonial through modern eras.

Readers who wish to experience this engaging work can purchase “Toward Understanding the Nigeria-Biafra War and Lingering Questions” at bookstores everywhere, or online at the Apple iTunes Store, Amazon, Google Play, or Barnes and Noble.