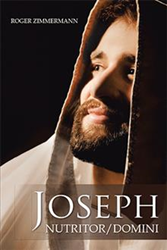 All his life, author Roger Zimmermann has heard people, in church, refer to St. but nowhere has he been able to find an accounting of his stewardship of those put in his care, namely Jesus and Mary. To fill the void left by the biblical narration of events, he writes “Joseph Nutritor/Domini” (published by Xlibris), the first book that actually follows the life of the man who stood as Jesus’ earthly father.

Joseph of Nazareth was chosen by God to be the father of his only son, and the wife and the child's mother, despite the controversy. He was a pious and religious man obedient to the Lord Moses, and honest and fair têkton. He obeyed every directive given him by God. He was told to flee into Egypt because King Herod was seeking the child's death, he was told that it was safe to return, and he was told not to return to Jerusalem. In all these he was obedient. And yes, not one word of his is recorded - readers do not know where or when he died and where he is buried. This book attempts to fill in those gaps.

On why he wrote the book, Zimmermann points readers to this passage of “Joseph Nutritor/Domini:”

St. Joseph is profoundly respected as a saint in all of the Christian sects. He is believed to be the corporeal father of Jesus Christ. He, arguably, is the most important man in any of the gospels without one word of his recorded by any of the four Evangelists! His first appearance was in the Gospel of Matthew as father of the Messiah, the Carpenter of Nazareth, the Lord of Mary, a man who was with us for a short time, and then disappeared. He is often confused with Joseph of the many-colored coat who became a force in Egypt. Our Joseph is a man who accomplished so much, but so little is recorded about him.

About the Author
Roger Zimmermann is a retired detective squad commander in the New York City police. He has been a patrol officer, patrol supervisor and squad commander primarily in underprivileged communities. He has a doctorate in education, a master's and bachelor's degree in current justice disciplines. He is a court certified expert witness in police operations and administration. He has been a college professor and then the director of education and training in police and corrections facility as well as a member of the criminal justice commission in the state of Florida. He has written monographs, professional articles, movie scripts and treatises published in workforce publications. He is a Eucharistic minister in his local church.