‘Touch-Me-Not’ follows one woman with an incredible gift as she navigates dangerous events. 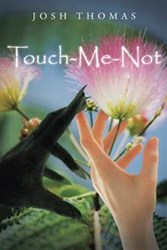 Much of the appeal of “Touch-Me-Not” comes from Thomas’ conscious effort not to be tied to convention. “There are no boundaries as to what characters can be involved,” he says.

Author Josh Thomas has always been a voracious, but curious, reader. “I had ideas that I had never seen in any other books,” he says, when asked about what drove him to write his new novel “Touch-Me-Not” (published by iUniverse). “What would happen if a werewolf met a mermaid? How would a titan fare in a battle with a horde of goblins? How would an ancient vampire relate to an Egyptian sphinx?”

Georgia Rose, Thomas’ protagonist, is a recluse with mysterious abilities: she can see a person's entire life within the seconds it takes to shake hands or bump into them. After her abilities are revealed, ancient and powerful beings arrive to either capture or guard Georgia and her growing powers. As the different sides align, Georgia comes to realize that while her life is in danger, her mere existence is a danger to many more.

Much of the appeal of “Touch-Me-Not” comes from Thomas’ conscious effort not to be tied to convention. “There are no boundaries as to what characters can be involved,” he says. “Using the idea that all fictional creatures were based on actual living beings, only to have disappeared so long ago that they became myth or legend, it allows me to recreate what that real being would have been and bring them up through the centuries to a modern storyline.”

About the Author
Josh Thomas is a graduate of Oklahoma State University and works with his father and brother as a financial advisor at an international brokerage firm. He and his wife, Christi, live on a small ranch in western Oklahoma. They have three daughters.