“The Prince of Carbery” from Christian Faith Publishing author Joyce Mirfin is based on a true story and tells of how an Irish tribal prince was humbled and faced hardship as he began a new life in colonial America. 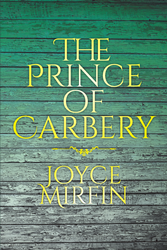 “The Prince of Carbery”: is based on a true story and follows the life of Teague McCarthy Reagh, the son of Irish tribal royalty. It is the creation of published author Joyce Mirfin, a Maryland native who once worked in the banking and real estate fields. After an early retirement, she spent time exploring her ancestry, her husband’s ancestry and the history surrounding the people and events that led to the creation of her debut historical novel.

Mirfin shares, “Based loosely on the true story of one of the author’s ancestors, the story follows the life of Teague MacCarthy Reagh, the oldest son of a 1600’s Irish tribal chief and heir to the title of Prince of Carbery. His life was changed dramatically and his arrogant pride silenced when the forces of Oliver Cromwell conquered his homeland.

“Captured and sent to work as an indentured servant on an English plantation in colonial America, he spent the next seven years of his life working as a common field hand on the Eastern Shore of Maryland. The hardships he endured brought about a sense of humility in him that had been absent until that time. Having eventually earned his freedom, Teague established his own plantations, married, and raised a family.

“Along the way, he learned the meaning of friendship, valuing his relationships with two unlikely acquaintances. The lessons that he learned from them would remain with him for the rest of his life. Despite what he had been taught as a child, he learned to respect the people that he thought he never could. ”

Published by Christian Faith Publishing, Joyce Mirfin’s new book is a historical read that brings readers along a story of adversity, a long fall from grace, and redemption.

View a synopsis of “The Prince of Carbery” on YouTube.

Consumers can purchase “The Prince of Carbery” at traditional brick & mortar bookstores, or online at Amazon.com, Apple iTunes store, or Barnes and Noble.

For additional information or inquiries about “The Prince of Carbery,” contact the Christian Faith Publishing media department at 866-554-0919.