“The Dawning of the Coming of Christ for His Spiritual Church” from Christian Faith Publishing author Judith Judith is a riveting book about the genuine church God has established that has endured sin and is redeemed in Christ. 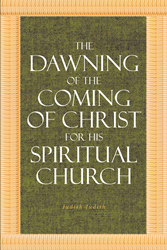 Judith shares, “In essence, this book enlightens you about the true church which Adonai had intended when He had decided to create Adam and Eve. It explains the fall of His church, how it had declined from spiritual to carnal. The church must overcome the ‘death cycle.’ There is also a ‘living cycle,’ when we do all things to the glory of the living Christ to attain unto that spiritual being He had intended for His church. There is a secret spiritual warfare of which the Lord had warned us that we must walk in the spirit, His Spirit, that we may discern the things of the spirit. We do have an enemy which dwells in the darkness of this world, the same who fought against Eve in mind through deception, the same which beguiled Sataniel, who was to rule this universe before the fall of Adam and Eve. When He came down to search out the kingdom, what did He encounter? On the secret coming of Christ with Eve to fight against the enemy to regain Sataniel and the angels which were subdued and to remove the works of ‘the one’ which works in darkness from her children; then shall the Lord appear, Rev. 12. Even so, He is already here with the second Eve, fighting for her son, also whom the enemy wishes to claim as his possession.”

Published by Christian Faith Publishing, Judith Judith’s new book reminds readers of the invisible spiritual war between good and evil and how one must be aware of the snares of evil.

This book will inspire the hearts and minds of readers with wisdom and grace in understanding the apocalyptic signs that lead to Christ’s return for His chosen people.

View the synopsis of “The Dawning of the Coming of Christ for His Spiritual Church” on YouTube.

Consumers can purchase “The Dawning of the Coming of Christ for His Spiritual Church” at traditional brick-and-mortar bookstores or online at Amazon.com, Apple iTunes store, or Barnes and Noble.

For additional information or inquiries about “The Dawning of the Coming of Christ for His Spiritual Church,” contact the Christian Faith Publishing media department at 866-554-0919.