British composer Julian Anderson today was named winner of the 2023 University of Louisville Grawemeyer Award in Music Composition for his work, "Litanies." 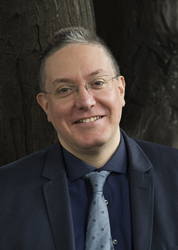 Julian Anderson has won the 2023 University of Louisville Grawemeyer Award for his composition, "Litanies."

The piece explores virtually every sound a cello and orchestra can make together. It spans a vast emotional range and is constantly inventive, but always toward an expressive end, never for the sake of novelty.

The Notre Dame Cathedral fire and the death of an esteemed colleague influenced the creation of “Litanies,” said Julian Anderson, a British composer who today was named winner of the 2023 University of Louisville Grawemeyer Award in Music Composition for the work.

“Notre Dame burned while I was writing the piece,” he said. “It was traumatizing to watch such an important icon of civilization go up in flames. The experience affected my writing.” A year earlier, as Anderson was beginning “Litanies,” Oliver Knussen, an acclaimed British composer, conductor and close friend of his, died, prompting Anderson to write the slow movement of the work in his memory.

Radio France, Hong Kong Sinfonietta, City of Birmingham Symphony Orchestra and chamber orchestras in Norway, Sweden and Switzerland commissioned the winning, 25-minute concerto for cello and orchestra, which German cellist Alban Gerhardt and the National Orchestra of France premiered in 2020 at Radio France Auditorium. Anderson dedicated the concerto to Gerhardt in recognition of his special qualities as a cellist, he said.

“The piece explores virtually every sound a cello and orchestra can make together,” said Marc Satterwhite, who directs the Grawemeyer music award. “It spans a vast emotional range and is constantly inventive, but always toward an expressive end, never for the sake of novelty.”

Anderson, 55, studied with John Lambert, Alexander Goehr and Tristan Murail early in his career. Boston Symphony, New York Philharmonic and Cleveland Orchestra have commissioned his work, and ensembles across Europe and the United States have performed “Khorovod” and “Alhambra Fantasy,” his most played pieces. In April, “Exiles,” a piece he wrote in 2021 for voices and orchestra, premiered in Berlin.

A professor of composition and composer-in-residence at Guildhall School of Music & Drama in London since 2007, Anderson also has taught music composition at Harvard University and the Royal College of Music. In 2021 he was named a Commander of the Order of the British Empire (CBE) for his outstanding service to music.

Schott Music Ltd. publishes his compositions written after mid-2014 and Faber Music, those written before.

Recipients of next year’s Grawemeyer Awards are being named this week pending formal approval by trustees. The annual $100,000 prizes also honor seminal ideas in world order, psychology, education and religion. Recipients will visit Louisville in the spring to accept their awards and give free talks on their winning ideas.