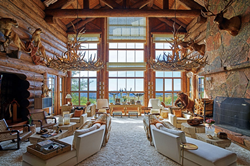 Greg Norman is asking $40 million for his hunting-and-fishing ranch in Colorado.

“One More Time For Britney Spears Home”
The Beverly Hills-area home where Britney Spears lived after her divorce from Kevin Federline is on the market at $6.8 million. Spears bought the home in 2007 primarily because of the home's seclusion while trying to avoid the paparazzi. Britney sold the home in 2012 taking a loss of about $2 million on the 7,800-square foot home. Home features include six bedrooms and a saltwater pool.

“Nicole & Keith's New Manhattan Condo”
Nicole Kidman and Keith Urban are the new owners of a Manhattan condo that was once the headquarters for the New York Life Insurance Company, an 1898 building that was converted to condos in 2018. Nicole and Keith, who paid about $3.5 million for the two-bedroom condo, also have homes in Nashville, Australia and Los Angeles. The New York Life building was one of many New York clock tower buildings.

“Taylor Swift Music & Home News”
Taylor Swift surprised her fans with a brand new album, Folklore. Rumors are circulating that Swift is also looking for a home in London to be near her British-actor boyfriend, Joe Alwyn. If so, it would add to her collection of Taylor Swift homes in Nashville, Rhode Island, Beverly Hills and New York City.

“Lori Loughlin & Mossimo Giannulli Sell Bel Air Mansion”
After getting caught in the college admission scandal with their daughters enrollment at the University of Southern California as fake athletes, Lori Loughlin and Mossimo Giannulli put their 12,000-square-foot Bel Air mansion on the market at $35 million. It recently sold for an estimated $18 million to Justin Mateen, a co-founder of Tinder.

“Greg Norman's Colorado Sporting Ranch”
Greg Norman’s name is best known for his championship golfing, but during his golfing years he might have been busier honing his entrepreneurial skills than his golf game. His big-game-hunting-and-fishing ranch in Colorado is now on the market, priced at $40 million.

“LeBron Scores New Beverly Hills Home”
LeBron James is the new owner of a 13,000-square-foot Beverly Hills home. The home with a pool and pool house, seven fireplaces and a lighted tennis court, was owned by Lee Phillip Bell who created the TV-soap-operas "The Bold and the Beautiful" and "The Young and Restless." The list price was $39 million.

“Neil Armstrong's Houston Home”
The Houston home where first-man-on-the-moon Neil Armstrong and family lived when he landed on the moon in 1969 is for sale at $375,000. The four-bedroom home comes with a pool, storage shed and a new roof.