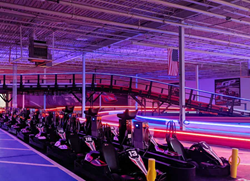 This location features the debut of an elevated K1 Speed track – not found in any other of its 40+ locations worldwide.

K1 Speed, the world’s premier indoor go-kart racing company, is excited to announce the opening of its second US franchise location, which marks two important firsts for the company: the first K1 Speed location in Michigan and its first elevated track design.

Located in Oxford, part of the Greater Detroit area, this K1 Speed can be found inside the state-of the-art entertainment facility known as 925 Legacy, alongside bars, restaurants, shops, and other exciting attractions for the entire family.

Racers that are used to driving gas karts are going to love the performance advantage of the electric karts. These Italian go karts are noticeably faster than their gas-burning counterparts, delivering instant torque and a top speed that approaches 45 miles per hour –the fastest in the industry. The go karts are available for adults, teens, and children who are at least 48” tall.

Oxford is known for its cold and snowy winters, so racers will appreciate the indoor 11-turn road course-inspired track that has been professionally designed for maximum overtaking opportunities. Furthermore, this location features the debut of an elevated K1 Speed track – not found in any other of its 40+ locations worldwide.

State-of-the-art Protex barriers line the circuit and provide a substantially safer alternative than the flimsy tire barriers found at most karting attractions. While the incorporation of LED lighting around the track brings the popular activity into the 21st Century, creating a futuristic and exciting environment when racing wheel-to-wheel with friends and family.

Off track, other popular attractions are available for guests of all ages. This includes bowling, pool tables, darts, fowling, axe throwing, and even curling!

For more information about K1 Speed Oxford including hours of operation and pricing, visit http://www.k1speed.com today.

The K1 Speed International Franchise started in 2016 to meet the international demand for a K1 Speed location. As a result of this program, K1 Speed can be found in seven different countries: France, Canada, Mexico, China, South Korea, Puerto Rico and the United States, with many more signed up and in the planning stage.