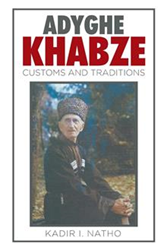 From senseless and merciless enmity to hatred and bloodshed, the world suffers unfathomable human problems. Author Kadir I. Natho realized the need to revert to ancient human teachings of mutual respect to help solve some of the problems most are facing now. In his book, “Adyghe Khabze, Customs and Traditions” (published by Xlibris), he discusses the priceless human moral values – the key for the solution of human misunderstandings.

In addition to its ancient historical and cultural value, “Adyghe Khabze, Customs and Traditions” is about the priceless ancient methods of upbringing of children of the nation - the actual unwritten code of conduct of its people - that brought up men and women, who were celebrated for millennia for their valor, trustworthiness and loyalty, dignity, high moral values, self respect, mutual help and understanding, based on respect to elders and love and care for children.

Natho believes that some of the methods of the upbringing of children would seem outmoded to modern readers and perhaps inapplicable to modern problems, but in general they will help the modern society to reevaluate most of their senseless interrelationships which are mainly based on their erroneous deep-seated ethnic, racial, national and religious prejudices.

An enlightening and valuable read, “Adyghe Khabze, Customs and Traditions” hopes to build the foundations of peace and harmony of men in the world.

About the Author
Kadir I. Natho was born in 1927 in Hatramtook, Anapa region, Caucasus. He became a refugee in 1943, survived World War II, escaped the First and Second Forced Repatriations to the Soviet Union in 1945 and 1947 from Austria and Italy, respectively, lived in various European countries and moved to Jordan in 1948. He emigrated from Amman to the United States in 1956, settled in New York City in 1959, graduated from the School of American Journalism and Henry George School (Science of Political Economy), studied English literature and took writing courses. He published a collection of his short stories, Old and New Tales of the Caucasus, in 1969, and a novel, Nicholas and Nadiusha, in 1978, which was translated and published in Russian and Circassian, in Maikop in 1992 and 1993 under the titles of Otchuzhdionyie and Tsif Lyiekher (Outcasts). In the 1960s, he acquired G. A. Press in New York City and published books and periodicals for Russian and Ukrainian authors and organizations, and his own bilingual magazine, The Circassian Star, in English and Circassian, in order to disseminate Circassian history, culture and folklore. He wrote three-act play, “Medea,” in Circassian, for the State Theater of the Republic of Adughey, premiered in Maikop in 2009 and performed repeatedly in Maikop, Krasnodar and Nalchik and once in Moscow. He also published with Exlibris Circassian History, in 2009, which was translated and published in Arabic, Russian and Turkish, and “Memoirs,” in 2010, which was translated and published in Turkish and translated in Russian.