Kaiser Hafezi Law is celebrating the third anniversary of their record-setting verdict on March 3, 2018, a $15.2 million construction negligence jury verdict involving a low back injury. 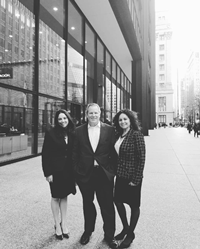 “The verdict was vindicating for our client and his family,” Attorney Daniel J. Kaiser stated.

Kaiser Hafezi Law is celebrating the third anniversary of its record-setting verdict on March 3, 2018. According to court documents, a $15.2 million construction negligence jury verdict involving a low back injury was awarded to the plaintiff.

In Kenneth M. Smith v. Retail Project Managers, Inc., Cook Co. Case # 15 L 1323, Cook County jurors awarded a man $15.2 million more than 10 years after he sustained a lower back injury while removing a desk from a truck on a construction worksite.

In official court documents, Plaintiff Kenneth M. Smith, 47, filed a negligence lawsuit in June 2008 against XSport Fitness Inc. and its subsidiaries; third-party contractors; and project manager Retail Project Managers Inc., alleging that RPM and its contractors did not provide “adequate equipment” or “proper staffing” to help in unloading a 300-pound desk.

According to the Jury Verdict Reporter, the $15.2 million verdict is higher than any Illinois verdict or settlement that has been previously reported for a back injury without paralysis or other significant injuries. Smith was represented by Attorney Daniel J. Kaiser and Attorney Mariam L. Hafezi of Kaiser Hafezi Law. After a two-week trial before Cook County Circuit Judge Clare E. McWilliams, jurors awarded Smith $15.28 million, but that was slightly decreased after they found him 0.5 percent responsible for his injuries, as reported in the actual jury verdict.

According to court documents, the defense argued that they were only contracted to do the installation, not anything to do with unloading. Alternatively, they argued that if there was liability, Smith’s injuries were not serious. Hafezi said one of the defense’s witnesses, a neurologist, testified in court that Smith only had a muscle sprain that would likely resolve itself in a few weeks or months.

“The verdict was vindicating for our client and his family,” Kaiser stated.

About Kaiser Hafezi Law
For over 30 years, the skilled legal team at Kaiser Hafezi Law has been protecting the rights of injury victims in Cook County, DuPage County, and all around the Chicagoland area. With the experience of a large firm and the personal touch of a smaller firm, we are committed to providing our clients with quality legal representation. Whether your injury was caused by the negligence of another party or you were hurt on the job, our knowledgeable attorneys will fight for your rights to obtain the just compensation you deserve.

To learn more about Kaiser Hafezi Law, visit https://www.kaiserlawoffice.com/ or call 630-233-9946 to schedule a free consultation.