Karl H. Folk’s newly released “Little City by the River” is an immersing novel of love in a time of indomitable suffering and bigotry.

“Little City by the River” from Christian Faith Publishing author Karl H. Folk is a consuming read that tells of compassion, romance, and resilience in a little city during the rampant racial supremacy dogma. 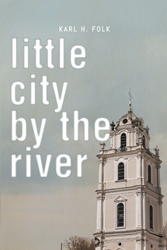 Folk shares, “A little city located in the shadow of a great metropolis has mercifully been spared the ravages and destruction of war. But the shadows are lengthening. People from occupied countries have been deported to perform manual labor for the German economy. They are beginning to resent their isolated status, enforced by wearing special badges on their clothing, and bombed-out victims are coming to find a new home.

“A young German officer falls in love with a beautiful girl and plans to marry her. The racial laws of the land present insurmountable obstacles. People are finding ways to circumvent them, in the process exposing the hypocrisy of the whole Nazi ideology. However, this endangers them with severe consequences. The loss of a ruinous war puts an end to all this.”

This book depicts evoking moments of people in an era of great tribulation and how they fare through such misery with unbridled determination and sacrifice for their faith and dignity.

View the synopsis of “Little City by the River” on YouTube.

Consumers can purchase “Little City by the River” at traditional brick-and-mortar bookstores or online at Amazon.com, Apple iTunes store, or Barnes and Noble.

For additional information or inquiries about “Little City by the River,” contact the Christian Faith Publishing media department at 866-554-0919.