“The End Times Revealed in Revelation” from Christian Faith Publishing author Kathy Gibson is a helpful and easy-to-follow breakdown of what the Book of Revelation tells mankind to expect in the end times. 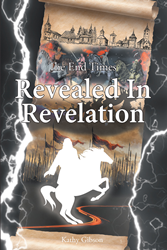 Gibson shares, “In the Bible, Genesis is the first book, the book of beginning; and Revelation is the last book, the book of closing, like the grand finale of the Bible, although you may not picture it that way. Like most people, I thought Revelation was all about things that were hard to understand. But with the Lord’s help, nothing is impossible with Him, and that is what He has done for me.

“If you ever put a jigsaw puzzle together, you know each piece must be put in its correct place before you have a completed picture, and Revelation is like that. As we go through Revelation, puzzle pieces will be found in its chapters, beginning with seven churches. Then more pieces are found in God’s wrath, starting with the seven seals, seven trumpets, seven vials, seven worship celebrations, and seven beatitudes. And each of those sevens will form a completed picture of how the end-times are revealed in Revelation. The thousand-year Millennium is next, with Jesus Christ ruling and reigning on the earth as the King of kings. And after that, Satan and sin is finished forever, and eternity begins without end!

“In this study of Revelation, we will see it is an amazing book with a wonderful ending! So why study Revelation? Because in Revelation 1:3, we are told, ‘Blessed is he that readeth, and they that hear the words of this prophecy, and keep those things which are written therein: for the time is at hand.’”

Gibson shares in hopes of raising awareness and motivating readers to rejuvenate their connection with God.

Consumers can purchase “The End Times Revealed in Revelation” at traditional brick & mortar bookstores, or online at Amazon.com, Apple iTunes store, or Barnes and Noble.

For additional information or inquiries about “The End Times Revealed in Revelation,” contact the Christian Faith Publishing media department at 866-554-0919.