Senior advisor for Trump, Katrina Pierson defines congressional candidate Angela Stanton-King as strong and courageous, says she is an example of second chances. 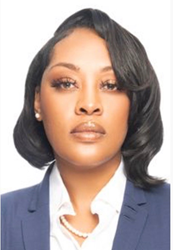 "Change only happens when we do something different. I believe I am that change. I’m walking proof that second chances work. I want to help others get the same opportunities I’ve been given."

“Angela Stanton-King is the definition of courageous and strong. She is the recipient of a pardon by President Trump, and now running for congress. Thank you for being such a leader and being so outspoken. I always say, there is such a vacuum of leadership in the community and now we have someone who is out there a beneficiary of our policies, making a whole new life for herself for her and others,” Pierson proudly shared.

Stanton-King has spoken candidly about her past non-violent felony that resulted in her giving birth in prison, chained to a bed. Stanton-King was mentored by Alveda King (niece of Dr. Martin Luther King Jr.) and became a community advocate and entrepreneur. Years after being released from prison, Stanton-King worked with the President Trump’s team to pass the First Step Act which prohibits female inmates from being shackled to a hospital bed while giving birth.

As the Republican candidate for Georgia’s fifth district, Stanton-King says her testimony is what makes her the right candidate for the district. “The definition of insanity is doing the same thing over and over without getting a different result. This district has voted democrat faithfully for years with very little change. Change only happens when we do something different. I believe I am that change. I’m walking proof that second chances work. I want to help others get the same opportunities I’ve been given.

Angela Stanton-King is the republican congressional candidate for Georgia’s fifth district. She is the Founder of American King Foundation – whose mission is to reunite American families separated by mass incarceration with a pathway to justice, economic stability, and relational wellness. She serves as the community outreach coordinator for The Alive Center – a place of help, hope, and healing for hurting people. Angela is an active board member for Beacon Leadership Academy and an advisor for Cando Clemency and Alveda King Ministries. She is also the Georgia Regional State Coordinator for Coalition of Leaders United.