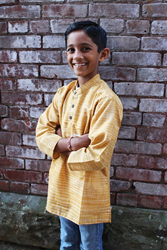 Most people think only adults can solve problems. That's not true.

Kedar Narayan, known as “Little Code Ninja,” is an eight-year-old with a long resume and a headline-grabbing plan. Narayan builds mobile apps with his eyes closed, solves problems with the ease of a child who does not hear the word “no,” and plans to “out-Buffett Buffett.” He is the kind of kid who already has done so much with his life that it makes adults’ heads spin.

This summer, Narayan won 1st place for his age group in The Paradigm Challenge, an international youth innovation and kindness competition. Narayan’s Pollinator Garden App and his compelling argument that we should replace our lawns with pollinator gardens earned him a trip to Los Angeles for The Paradigm Challenge Prize Ceremony on July 29th.

Narayan is quick on his feet and a natural on the stage. The ease he displays in his TEDx Talk and TV appearances belies his age and bodes for a bright future in explaining complicated ideas in layperson’s terms. When Narayan appeared on Steve Harvey’s “Little Big Shots,” Harvey opened their interview by asking, “What, exactly, is coding?” By the end of the show, Harvey was sold and told Narayan he wanted to invest in Narayan’s company one day.

Which brings us to Narayan’s plan to “out-Buffett Buffett.” Narayan started watching – and studying – Warren Buffett’s “Secret Millionaires Club” series when he was six years old. He also studies a chart that documents Mr. Buffett's wealth as a function of age. “Kedar has been using the chart as a barometer for his own success,” explains his father, Kartik. ”Kedar has calculated that, with his winnings from The Paradigm Challenge, he now is ahead of the curve”. The 8-year-old does not plan to lose his edge on Buffett. Ever.

It is not all about money, though, to this young innovator. Narayan’s mother, Anita, explains that “Kedar says that he loves Mr. Buffett because he is very hard working, very intelligent, and very passionate about helping others, which is why he is Kedar's role model.” Narayan is giving his Pollinator Garden App coding information away for free in the hope that people will take the opportunity to start making a difference, one backyard at a time. He also is working with 4-H and visited with the Smithsonian Institution’s Pollinator Garden educators to help spread the word about his app.

In addition to helping the planet, Narayan also wants to help others, so he is working with his local 4-H organization in Leigh Valley, Pennsylvania to start a coding club. He also recently invented a game, called STORIBOT, to teach visually-impaired children how to code. STORIBOT won four awards at this year’s National Invention Convention and Entrepreneurship Expo at the U.S. Patent and Trademark Office headquarters in Alexandria, Virginia.

“Most people think only adults can solve problems,” notes Narayan, “That’s not true. All it takes is some thought and hard work to make a difference. The Paradigm Challenge has figured out that us kids are just sitting here, waiting for you adults to believe in us.”

In addition to awarding cash prizes, the private foundation behind The Paradigm Challenge is committed to turning the best student ideas into reality. “We want to empower students to help address real-world problems and, when they do, we will help implement those ideas,” said Jeff Richardson, the CEO and Founder of Project Paradigm, the private foundation that funds and runs The Paradigm Challenge. Project Paradigm awarded last year’s Paradigm Challenge Prize winner, “The Fire Mitt,” an all-expenses-paid patent application and is exploring options for getting the product developed and to market. The patent applications are filed in the inventors’ names and the student inventors retain all intellectual property rights.

"The students' determination and commitment to find creative solutions to real-world problems are evident in each and every idea," noted Richardson. The competition, in its second year, has been recognized twice by The White House for its contribution to youth innovation learning. Project Paradigm’s free student-led video lesson plan helps students break down problem-solving into easy, manageable steps to get from problem to solution.

The next Paradigm Challenge inspires students to generate new ideas to improve personal health through wellness and healing and will officially launch on August 1, 2017. The entry deadline is May 1, 2018.

About Project Paradigm: Project Paradigm, a national private foundation headquartered in Los Angeles, California, aims to identify, support, and collaborate with passionate individuals and organizations to inspire, lead, and facilitate paradigm shifts in the approaches to global challenges. Learn more at projectparadigm.org/founder. Or like us on Facebook and Twitter (@ParadigmChlleng).