Keith Albrecht’s newly released “A Forbidden Love: A Short Novel” is an intriguing tale of a tabooed love between a Mennonite and an outsider

“A Forbidden Love: A Short Novel” from Christian Faith Publishing author Keith Albrecht is an alluring novella of a barred love between a young Mennonite man and a Native American woman. 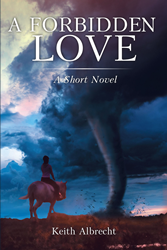 Albrecht shares, “Ed was a sixteen-year-old conservative Mennonite farm boy growing up on the family farm in Central Kansas in 1884. One day, while riding Copper, his well-trained and beloved horse, to get the cows home for milking, Ed noticed something behind a sand plum thicket. Not getting a very good look at what it was behind the thicket, his curiosity drove him back there after the milking was done. Whatever it was behind the thicket left a small pile of sand plum seeds. It had to be a human because most animals would eat the seeds along with the plums. Ed was determined to find who it was stealing their sand plums. The next day, Ed went a little earlier to get the cows home to catch this sand plum thief.

“Ed was not prepared for what he found. A beautiful Native American girl about his own age, the most beautiful girl he had ever seen, was the sand plum thief.

“When she saw Ed watching her, she gave him a smile that would have melted the heart of any sixteen-year-old American boy, but she quickly ran off and hid from him. This did not deter Ed from making plans to come back the next day to see the beautiful girl. He had just one problem though. He was a Mennonite, and Mennonites were to associate with their own people only. How could he possibly tell his parents that the sand plum thief was a beautiful Native American girl, and he was going back the next day to see her again?

“Will this develop into an interracial relationship, something unheard of in Mennonite culture at that time, or will it lead only to heartbreak for two young people?”

Published by Christian Faith Publishing, Keith Albrecht’s new book is an engaging tome of passion and chivalry between a man and a woman whose origins differ, causing unforeseen odds which they must overcome to prove their solidarity in love.

Readers will surely be captivated by a love outlawed by tradition and race, and the unexpected outcome.

View the synopsis of “A Forbidden Love: A Short Novel” on YouTube.

Consumers can purchase “A Forbidden Love: A Short Novel” at traditional brick-and-mortar bookstores or online at Amazon.com, Apple iTunes store, or Barnes and Noble.

For additional information or inquiries about “A Forbidden Love: A Short Novel,” contact the Christian Faith Publishing media department at 866-554-0919.