Kelly Alex’s newly released “Love, The Other Dirty Four-Letter Word” is a galvanizing tale of a man’s desperate pursuit for love that turns his life upside down

“Love, The Other Dirty Four-Letter Word” from Christian Faith Publishing author Kelly Alex is a meandering book of a man’s yearning for a romantic interest that puts him in a compromising position. 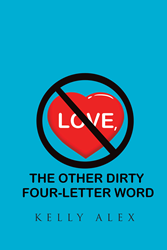 Alex shares, “Darryl McCloud had been unlucky in love meeting the worst kind of females. When he did meet one that had her head on straight, things didn’t work out. That left him fed up with the chase. Enter Jennifer Parker, the sister of his best friend Jason’s girlfriend Rebecca. Jennifer was just returning home from college and still reeling from having her heart broken by her first real love. After a rocky beginning and an unexpected encounter, they became friends.

“Darryl found himself in love, but Jennifer was adamant about not wanting to get into a relationship, though at times her actions said otherwise. With his feelings growing every day, Darryl picks Jennifer’s birthday party in July to make a move fearing he was entering the ‘just friends’ zone. It backfires and he was asked to leave. Darryl goes into a mood swinging depression that threatens his job status and sanity. Jennifer regrets overreacting and wishes she had the chance to do it all over again. While out of town for the Fourth of July, she decides to come clean about her feelings for him when she gets back. Upon returning home, she pays an unannounced visit to his house only to find Darryl with another female. Later, Darryl hears something from Jason that has him pay an unannounced visit only to see her with another man. Both instances were not what they appeared to be.

Published by Christian Faith Publishing, Kelly Alex’s new book follows the unrequited feelings of a man that yields a twisted worldview of love and makes his life blossom with intrigue.

Readers will surely be entertained and relate to the protagonist’s gauche yet striking personality that gains the right person that fits his character and matches his passion.

View the synopsis of “Love, The Other Dirty Four-Letter Word” on YouTube.

Consumers can purchase “Love, The Other Dirty Four-Letter Word” at traditional brick-and-mortar bookstores or online at Amazon.com, Apple iTunes store, or Barnes and Noble.

For additional information or inquiries about “Love, The Other Dirty Four-Letter Word,” contact the Christian Faith Publishing media department at 866-554-0919.