“Hidden Truth” from Christian Faith Publishing author Kenneth R. Taylor Sr. is an articulate discussion of faith and what is known of God’s plans that will resonate with many who have sought a deeper connection with God’s grace. 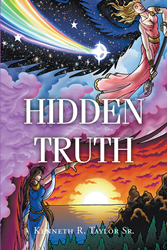 “Hidden Truth”: a powerful argument for the need for a return to God. “Hidden Truth” is the creation of published author Kenneth R. Taylor Sr., a US Army veteran who received his high school diploma (GED) on June 3, 1965, from Rossville High School, Rossville, Indiana, and graduated from Palmer Writers School, Minneapolis, Minnesota, on April 17, 1973. He went on to receive an Associate of Arts degree (1977) from Community College of Denver and an Associate of Science degree (1994) from Community College of Aurora, Aurora, Colorado. Taylor received his bachelor’s degree (1980) from Metropolitan State University of Denver and his master's degree (2004) from Rochville University, Karachi, Pakistan, an online unaccredited university, both degrees in technical communications. He also received a certificate after completing the communication mastery level certificate program (1999) at Mountain States Employers Council, Inc., in Denver, Colorado. Taylor is a life member of all the Masonic Lodges and served as worshipful master in 1992. He holds the thirty-second degree and a life member of the Blue Lodge, Scottish Rite Lodge, and the York Rites Lodge. He was knighted a Knight Templar. He served in the U.S. Army Corps of Engineers (1961) as an electrician for seven years active duty and two years in the active reserve of the Colorado Army National Guard (1960) and Colorado Air National Guard (1975). He was active duty in the U.S. Navy Seabees for almost three months (1968). Taylor is the author of two previous books, “Prince Manx and His Army of Cats” and “The Joy of Poetry and Short Stories”.

Taylor shares, “I believe that I will be raised up in the last days to lead an army to this sacred land of America called Adam-ondi-Ahman, Missouri. I shall lead them as Moses led the Israelites, but also a powerful military leader leading a force of saints, for I am from the lineage of Ephraim and the seed of Abraham of the House of Israel. All this has been confirmed to me by many visions, dreams, and even by a patriarch. The time is coming near for you and all people of the world as believers in Jesus Christ, the Son of the great King God, to be part of this coming new kingdom. All who join the forces of the great King God, whose Son Jesus Christ will rule this earth, will be part of this great glory.

“It was my destiny to come to this world to overcome my obsessions and all other weaknesses that controlled my life. I have no more desire for the power of the military, only for the mission that God will call me to do. I am now humble and love all people, my Father in heaven, and his Son Jesus Christ. I will meet the King of Kings and Lord of Lords with my army when He comes to Zion. I have been given much power, but I did not seek it. God has given me the knowledge and understanding to write this book, it is true. You have a chance to read and accept Jesus Christ as your Lord and Savior. Open the pages of this hidden truth and take hold of your life for the coming new King.”

Taylor provides a complex and inspiring discussion within the pages of this impactful study of Christianity.

For additional information or inquiries about “Hidden Truth,” contact the Christian Faith Publishing media department at 866-554-0919.