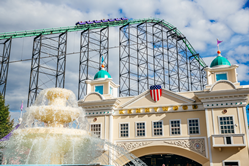 In its 34th year, the NAPHA survey is among the most reliable in gauging the favorite parks and rides of some of the amusement industry’s most devoted patrons. According to NAPHA, their typical member has visited more than 140 different parks, riding an average of 330 roller coasters. These coaster connoisseurs voted Kennywood’s Phantom’s Revenge as their favorite steel roller coaster, with The Steel Curtain, the park’s record-breaking collaboration with the Pittsburgh Steelers, named the Best New Attraction by the association. Steel Curtain, which set a world record for tallest inversion (197) and North American record for most inversions (9) when it opened last summer, was also voted 2019’s Best New Roller Coaster in the Golden Ticket Awards, another well-recognized amusement industry survey. A clean Kennywood sweep of the coaster rankings was just missed, as the wooden classic Jack Rabbit, celebrating its 100th year in 2020, tied for second-favorite wood coaster.

"Winning Favorite Traditional Amusement Park and Best New Attraction shows our commitment to developing new thrills while still preserving historic attractions is paying off,” said Kennywood Assistant General Manager Rob Henninger. “We thank NAPHA and their members for recognizing these efforts, and our team at Kennywood for making it all possible.”

While Kennywood’s 2020 Summer Season remains on hold due to the impacts of the coronavirus pandemic, the park remains committed to the health and safety of its Team Members and Guests above all. For more information on Kennywood, please visit http://www.Kennywood.com.

About Kennywood and Palace Entertainment:
Kennywood is America’s Finest Traditional Amusement Park! The Pittsburgh-area park offers a unique mix of modern thrills and classic rides, including seven roller coasters, a 12-ride Kiddieland, and several attractions that cannot be found anywhere else. Kennywood, founded in 1898 and named a National Historic Landmark in 1987, continues to provide unforgettable fun for all ages.