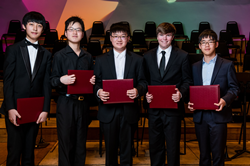 “Every year, our participants continue to raise the standards for what excellence looks like and we are proud to play a part in the careers of these remarkable young musicians,” said Alexander Braginsky, founding president and artistic director of the e-Piano Junior Competition.

Kevin Chen, 14, from Calgary, Alberta, Canada, earned First Place in this year’s e-Piano Junior Competition, capturing the top prize of $10,000. The international event, held in Minneapolis, Minnesota from July 7 – 13, showcased the talent of some of the world’s best classical pianists ages 17 and under.

The e-Piano Junior Competition is unique in that it invites contestants to audition “virtually” on Yamaha Disklavier reproducing pianos, in the convenience of their home town or country. Contestants’ performances are faithfully captured by the instrument, along with a synchronized video recording. Both performance and video data are then sent electronically to the e-Piano Junior Competition for preliminary auditions, where judges are able to evaluate each contestant on a big screen, as their performance is recreated note-for-note on an adjacent Disklavier, as if the contestants were performing “live” for the judges.

Following the preliminary selection, 25 contestants, all hailing from South Korea, China, Hong Kong, Indonesia, Russia, Canada and the United States, were invited to compete at the Ted Mann Concert Hall at the University of Minnesota. On July 8, the field was narrowed down to 12 semifinalists who went on to compete in another round of solo recitals that included required works by Schubert and Variations by either Beethoven or Mendelssohn. On Saturday, July 13, the top five finalists performed with the Minnesota Orchestra from the stage of Orchestra Hall where the winners were later announced.

“It was incredible to witness the level of musical talent and dedication in this year’s competition,” said Alexander Braginsky, founding president and artistic director of the e-Piano Junior Competition. “Every year, our participants continue to raise the standards for what excellence looks like and we are proud to play a part in the careers of these remarkable young musicians.”

The five competition finalists performed exclusively on a Yamaha Disklavier CFX, with video, keystroke and pedal data streamed live over the internet. This made it possible for the pianists’ performances with the Minnesota Orchestra to be recreated live on similarly equipped Disklaviers in living rooms nationwide, the instruments’ keys and pedals moving up and down, perfectly in sync with what piano aficionados experienced simultaneously on their big screen televisions.

Yu Lei was awarded this year’s Variations Prize, earning $500 for the best performance of Beethoven or Mendelssohn Variations in the Semi-Final Round.