Kevin D. Golden’s newly released “The Adventures of Captain Good” begins the riveting saga of an ordinary man finding a new extraordinary quest as a hero

“The Adventures of Captain Good” from Christian Faith Publishing author Kevin D. Golden is a thrilling novel that follows a new superhero’s exploits to defeat a great threat to the world’s safety, yet what lies behind this mission is even more than what it seems. 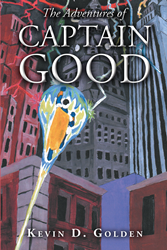 “The Adventures of Captain Good”: a gripping fiction about weighing choices, standing up for one’s principles, and saving the world. “The Adventures of Captain Good” is the creation of published author Kevin D. Golden, the current pastor of Sweet Home Church in Franklinton, Louisiana since January 2018. Married to Beverly Golden for over 35 years, they are parents of four.

“With these words, an ordinary young man’s life is transformed forever into the amazingly powerful, high-flying superhero, Captain Good!

“But unknown to him, deadly, evil forces have already established a foothold in his city. If not stopped they will spell the end for Cleveland, Ohio, and even the world itself! And that same evil is even now exerting a powerful influence on the very people closest to the young hero’s life.

“As Captain Good, Rodney is blessed with a stunning array of powers with which to accomplish his mission, including super human strength, endurance, speed, and invulnerability along with enhanced senses, a blue purging flame which destroys the weapons and influence of evildoers, and a mysterious ability to see the truth about people and things which he comes into contact with.

“Yet Rodney is also burdened with a terrible grief that could threaten to undermine his gifts and endanger everyone he hopes to help. And a horrible secret will be revealed that would cause an even greater tragedy if Captain Good should fail. But if he is going to win, Rodney will have to find a power still greater than his own; and even then, he may be forced to make the ultimate sacrifice if the world is to be saved and his enemies defeated.

“Will Captain Good save the day but lose those most precious to him in the process? Or will he lose everything, including his newfound powers, his family, and his life?

“The answers are found in this incredible first novel by Kevin D. Golden, author of The Duty of Man: Life Lessons and Solutions from the Book of Ecclesiastes.”

Published by Christian Faith Publishing, Kevin D. Golden’s new book is an interesting and riveting novel about a gifted man who is challenged to a battle that will test his strength of body, of mind, and of heart. Readers of all ages will be delighted to discover the adventure in these pages.

View a synopsis of “The Adventures of Captain Good” on YouTube.

Consumers can purchase “The Adventures of Captain Good” at traditional brick & mortar bookstores, or online at Amazon.com, Apple iTunes store, or Barnes and Noble.

For additional information or inquiries about “The Adventures of Captain Good,” contact the Christian Faith Publishing media department at 866-554-0919.