Kevin Dickerson’s newly released “Jesus, Revelations, the End Times, and Me” is a perspicacious read that opens the mind to the truth of the biblical end times

“Jesus, Revelations, the End Times, and Me” from Christian Faith Publishing author Kevin Dickerson is a potent book that enlightens people on the end of days heralded by disasters and deceptions. 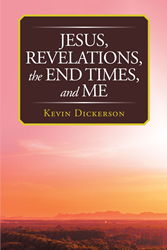 Dickerson shares, “This book is written for the sole purpose of showing people the signs of the times—the end times. It began as a documentation of the things that Jesus himself had shown and explained to the author. The author didn’t want to forget these things, so right after the visitations, he would get up and go to his computer to write these things down. He would do so while he could remember every little detail. Some of the things in this book would come to pass weeks after he was shown them, and some are still being revealed to him today, some twenty-five years later. This project is not done for book sales or mammon; no, that is not the Father’s purpose. The author’s purpose is to scream from the rooftop to announce his coming, to try to get the attention of mankind, and to warn them—to warn them to fear God and to turn to him as he will then turn to them. Yes, people have been predicting the Father’s coming for years, claiming earthquakes, wars, and rumors of wars. All these things are true. Instead of thirty-five volcanos erupting a year, thirty-five volcanos erupt a day. The last of the four world powers, Rome, has to rise again; and even more importantly, he said, “Learn the parable of the fig tree.” These are two unmistakable signs of the times that cannot be duplicated. The tribulation period has begun. If you know how to search the heavens, you will find Wormwood at our doorstep. In this book, there are pictures of a system of planets that are in our skies today that he believes accompanies Wormwood. He would not mislead or doctor any pictures for the sake of mammon. Jesus said during the end of days that man is going to experience a great deception.”

Published by Christian Faith Publishing, Kevin Dickerson’s new book desires to strengthen the believers’ faith in God to stay steadfast during this present tribulation and God’s imminent final judgment on all creation.

View the synopsis of “Jesus, Revelations, the End Times, and Me” on YouTube.

Consumers can purchase “Jesus, Revelations, the End Times, and Me” at traditional brick-and-mortar bookstores or online at Amazon.com, Apple iTunes store, or Barnes and Noble.

For additional information or inquiries about “Jesus, Revelations, the End Times, and Me,” contact the Christian Faith Publishing media department at 866-554-0919.