“Mazzaroth” from Christian Faith Publishing author Kevin Jones is a riveting story about an alien world that brims with living beings like Earth. 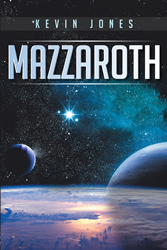 “Mazzaroth”: an enthralling science-fiction book about an extraterrestrial Earth-like planet where life exists that shows the magnitude of God’s creation of the universe. “Mazzaroth” is the creation of published author Kevin Jones, a loving family man, a dedicated writer, and an avid biker, skier, snowboarder, and golfer from Lakewood, Colorado.

Jones shares, “Have you ever gazed into the sky on a clear night and wondered, ‘Are we alone in the universe, or are there beings similar to humans living on other planets?’ There is now scientific evidence that many stars in the universe have planets orbiting them. The question then becomes, did God create only one planet in the entire universe that can support life?

“To fully explore the question, we must suspend disbelief and let our minds consider options that we may never have thought of previously. Perhaps the question to be asked is not, ‘Did God create other planets similar to Earth?’ but rather, ‘Why should we believe that an all-powerful God would only create one planet in the entire universe that is populated with intelligent life-forms?’

“It must be emphasized that despite all the latest scientific discoveries, no person will ever truly know how the universe was created until God himself reveals the truth to us. This fictional story is intended to serve as a reminder that God has dominion over the entire universe, not just those things we are familiar with on Earth. Although it is possible it was God’s plan to make the humans on Earth the only living beings in the entire universe, we must accept the possibility that God may have created other worlds similar to Earth somewhere in the vastness of space.

“You are encouraged to read this book with an open mind. The story may be considered controversial by some. It may be inspirational to others. Ultimately, it is not written to provide an explanation of God’s plan for the universe, but hopefully, it can serve as a thought-provoking platform for discussion of how modern science can provide insight into God’s master plans.”

Published by Christian Faith Publishing, Kevin Jones’s new book is an insightful narrative that delves into the omnipotence of God in creating various life-forms across the expanse of the universe.

This book invites willing hearts and open-minded individuals to understand the profound wisdom of the possibility of God molding life in other planets to show His glory and power.

Consumers can purchase “Mazzaroth” at traditional brick-and-mortar bookstores or online at Amazon.com, Apple iTunes store, or Barnes and Noble.

For additional information or inquiries about “Mazzaroth,” contact the Christian Faith Publishing media department at 866-554-0919.