Kevin Keiser’s newly released “Judged: The Book of Ahmad” is an electrifying novel of a man whose loyalty is tested in the time of the Apocalypse

“Judged: The Book of Ahmad” from Christian Faith Publishing author Kevin Keiser is a galvanic narrative that follows a man’s circumstances in the reign of the beast where his stance is greatly challenged when his family is threatened by evil. 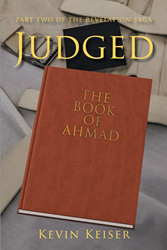 “Judged: The Book of Ahmad”: an engrossing book about Ahmad, a hateful man who becomes a commander of the Beast’s armies, and his trying circumstances that make him decide where his true devotions lie. “Judged: The Book of Ahmad” is the creation of published author Kevin Keiser, a retired technical sergeant in the US Air Force who currently resides in Sioux Falls, South Dakota.

Keiser shares, “The beast has created his kingdom on earth in the former nation of Israel. With the promise of bountiful food and modern amenities, thousands of people have taken up residence there. Once inside, they soon discover that crime, corruption, and terrorism are rampant in the ‘Promised Land’—all under the direction of the beast.

“Ahmad, fueled by his hatred for religion, rises to the rank of general and commander of the beast’s armed forces. But when his family comes under the wrath of his lord and master, Ahmad must decide where his loyalty lies.

“The days of judgment are at hand and the future of the human race is at stake. Will mankind find redemption and their way back to God, or will they condemn themselves to extinction?”

Published by Christian Faith Publishing, Kevin Keiser’s new book shows the corruption evil has manifested in a land thought to be the haven of grace and how the people battle their persecution with firm faith in God.

This book showcases an enrapturing depiction of the biblical destruction and redemption that comes in unexpected moments and forms.

View the synopsis of “Judged: The Book of Ahmad” on YouTube.

Consumers can purchase“ Judged: The Book of Ahmad” at traditional brick-and-mortar bookstores or online at Amazon.com, Apple iTunes store, or Barnes and Noble.

For additional information or inquiries about “Judged: The Book of Ahmad,” contact the Christian Faith Publishing media department at 866-554-0919.