What makes the KeyBank Rochester Fringe Festival such an accelerated success story? Among the many factors are its large-scale, free, outdoor spectacle performances. 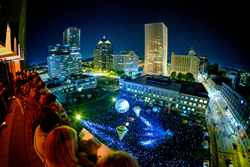 “[Our] large-scale spectacle entertainment in public spaces ... is not only a unique experience for festival-goers, but it provides incredible access to the arts for our community at large."

The KeyBank Rochester Fringe Festival debuted in 2012 with 180 shows over five days in downtown Rochester, NY, and drew more than 33,000 attendees – twice what it had anticipated. Now a 12-day event (Tuesday, September 10 – Saturday, September 21), the 2019 Rochester Fringe will feature more than 575 performances and events, and organizers expect attendance to exceed last year's 78,000. One of the most-attended fringe festivals in the U.S., it is also the largest multi-arts festival in New York State.

“While all fringe festivals are reflective of their own communities, we’re proud of the fact that, to date, we are the only one that programs large-scale spectacle entertainment in public spaces,” says Festival Producer Erica Fee. “This is not only a unique experience for festival-goers, but it provides incredible access to the arts for our community at large.”

Beginning with California’s aerial dance troupe BANDALOOP dancing on the side of a 21-story building in 2012, Friday & Saturday on the Fringe has included the U.S. premieres of Canada’s Circus Orange and the U.K.’s Massaoke. This year, the festival will present the return of French street theatre company Plasticiens Volants (pronunciation here), which made its U.S. debut at Rochester Fringe two years ago with a show called "BIG BANG" to more than 20,000 enthralled audience members. On Friday and Saturday, Sept. 13 & 14, they’ll turn downtown Rochester into a giant aquarium with another U.S. premiere: "Pearl: Secrets of the Sea." Using their giant inflatable puppets, Plasticiens Volants’ two 8 p.m. performances will begin with a 20-minute street promenade, as sea creatures – including a 60-foot whale – “swim” to their destination at the City’s vacant Parcel 5. There, a dramatic story involving a gigantic sea serpent, an enormous octopus, and a precious pearl will unfold for audiences of all ages.

Another big factor in Rochester Fringe’s success: so many free performances and events in general – more than 150 this year. Those include Fringe Finale Weekend’s return of Massaoke. This year, the sing-along sensation will perform its signature rock-anthem show, "Massaoke: MixTape," on Friday, Sept. 20, and its "Massaoke: Night at the Musicals" show – the North American premiere – on Saturday, Sept. 21, the final night of Fringe.

The Spiegelgarden, a public, pop-up, outdoor lounge, will feature free KIDS DAY activities (Saturday, Sept. 21) and Pedestrian Drive-In – a free, big-screen film series that kicks off with a special showing of "RBG," the Ruth Bader Ginsburg documentary. Other free Fringe favorites – including the exciting, all-styles dance battle featuring teams from all over the Northeast called Fringe Street Beat (Saturday, Sept. 21) and Gospel Sunday (the best of the Rochester gospel scene in the Eastman School of Music's Kilbourn Hall on Sunday, Sept. 15) – will also return. Many venue-curated performances and events are also free.

Turning to ticketed events, Fringe’s 2019 comedy headliner is award-winning comedian, actor, director and author Mike Birbiglia in "An Evening with Mike Birbiglia" in Kodak Hall at Eastman Theatre on Friday, September 20 at 7:30 p.m. Fringe will also present Nate DiMeo’s The Memory Palace, a Peabody-nominated history podcast, in "The Memory Palace Live" at the Eastman School of Music's Kilbourn Hall on Thursday and Saturday, Sept. 19 & 21, as well as "The Memory Palace On-Site Listening Experience at High Falls," a free, site-specific show running throughout Fringe. Both events will feature a specially commissioned Rochester story.

A new Fringe partnership with Gateways Music Festival has resulted in "A Celebration of the Life of Paul J. Burgett Through Music" at the Eastman School of Music’s Hatch Recital Hall on Saturday, September 14. Burgett was a beloved board member of both organizations, and a driving force in the success of these and so many other wonderful community initiatives. Also new to Fringe this year: the Rochester Philharmonic Orchestra’s 2019-20 season opener, "Scheherazade .2." Fringe is also partnering on special events with ImageOut: The Rochester LGBT Film & Video Festival and Rochester’s Puerto Rican Festival.

“We are – above all – a true community festival run by a Rochester non-profit with local board, staff and support, and each year, we work hard to engage more and more of the community we serve,” adds Rochester Fringe Festival Board Chairperson Justin L. Vigdor.

Information and tickets for all shows are now available via rochesterfringe.com. The printed Fringe Guide and app will be available in August.

From its five-day debut in 2012, the KeyBank Rochester Fringe Festival has become one of the fastest-growing and most-attended fringe festivals in the U.S and the largest multi-genre arts festival in New York State. A bifurcated festival, it allows for a combination of curated, headline entertainment and an open-access portion programmed by the venues themselves. Renowned among the world’s 200+ fringe festivals for its large-scale, outdoor, free-to-the-public performances – including the U.S. premieres of Canada’s Circus Orange (2014), France’s Plasticiens Volants (2017), and the UK’s Massaoke (2018) – Rochester’s Fringe was also the first fringe festival in North America to feature a Spiegeltent, which is now an annual attraction. From comedy to theatre, from music to dance, from visual art and film to spoken word, and from children’s entertainment to multi-disciplinary collaborations, the festival’s diversity also extends to venues that span the gamut from parked cars to grand theatres.

Rochester Fringe Festival connects and empowers artists, audiences, venues, educational institutions, and the community to celebrate, explore, and inspire creativity via an annual, multi-genre arts festival. The not-for-profit, 501(c)3 corporation was pioneered by several of Rochester’s esteemed cultural institutions including Geva Theatre Center, the George Eastman House and Garth Fagan Dance; up-and-coming arts groups like PUSH Physical Theatre and Method Machine; and higher-education partners such as the University of Rochester and Rochester Institute of Technology. The organization’s overarching mission is to make arts readily accessible to audiences, as well as to provide a platform for artists to share their ideas and develop their skills, while stimulating downtown Rochester both culturally and economically.

About KeyBank: KeyBank's roots trace back 190 years to Albany, New York. Headquartered in Cleveland, Ohio, KeyCorp is one of the nation's largest bank-based financial services companies, with assets of approximately $144.5 billion at June 30, 2019. Key provides deposit, lending, cash management and investment services to individuals and businesses in 15 states under the name KeyBank National Association through a network of approximately 1,100 branches and more than 1,500 ATMs. Key also provides a broad range of sophisticated corporate and investment banking products, such as merger and acquisition advice, public and private debt and equity, syndications and derivatives to middle market companies in selected industries throughout the United States under the KeyBanc Capital Markets trade name. For more information, visit https://www.key.com/. KeyBank is Member FDIC.