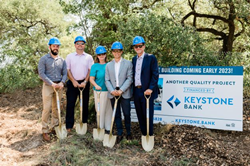 “While it’s uncommon to see banks grow this quickly, it’s not unprecedented when you have the right combination of a great team and market opportunities."

Keystone Bank raised $18 million in its latest round of funding – with an industry expert noting its growth makes it one of the fastest growing banks in the country.

The fresh funds will be used to expand its team, enhance its banking technology and put the four-year-old community bank on track to handle over $1 billion in assets in the coming two years. It also plans to keep an open eye for additional acquisition targets.

With the latest round, Keystone Bank has raised a total of $78 million in four rounds of funding since its launch in the fall of 2018. The most recent round attracted 113 investors, about 60% of which were new to the bank.

It has also amassed $745 million in total assets in just four years - and is projected to reach $1 billion in total assets within the next 24 months. The company credits its success to a grassroots movement of support from the local community, while an industry expert notes the bank’s leadership plays a critical role.

“We’re growing by getting our name out there, one customer and meeting at a time, and by allowing people to have direct access to us,” said Jeff Wilkinson, Keystone Bank’s chairman and CEO. “People in Austin and Central Texas love the community bank model. Word has been getting out about what we’re doing – and people want to be a part of it.”

The funding will go towards hiring more bankers, focusing on skilled loan officers and people with proven relationship-building experience, to help the company continue to expand. Keystone will also enhance technology for customers and increase its digital presence.

“Our employees are at the root of our business, so we want to continue hiring talented individuals who are as passionate about our clients and the finance world as we are,” said Bryan St. George, president of Keystone Bank. “We also want to make it easier for our customers to bank with us by investing in new technology that meets their existing and future needs.”

Keystone Bank now employs just over 60 people and recently broke ground on a new corporate headquarters site at the southeast corner of RR 620 and Ladera Blvd. in Bee Cave, Texas, a suburb located west of Austin. The bank anticipates moving into its new space in the third quarter of 2023. Clients include a variety of local businesses, including: LALO Tequila, Atreyu Running Co., FitJoy Foods, LeRoy and Lewis Barbecue, Bare Performance Nutrition and Frontyard Brewing.

Another client, Qualtik, is a Keystone Bank vendor, too - one that’s keeping the bank on the forefront of industry technology. More specifically, Qualtik developed a software program that helps community banks and investment funds “stress test” and analyze commercial real estate loans in real time.

The head of Independent Bankers Association of Texas (IBAT), the nation’s largest state association dedicated exclusively to community bank advocacy, indicates how and why the growth has been impressive.

“Keystone Bank is one of the fastest growing banks in the country,” said Chris Williston, president and CEO of IBAT, adding it’s been expanding in a thoughtful, responsible manner. The Austin Business Journal also recently named it one of the publication’s Fast 50 Awards.

“While it’s uncommon to see banks grow this quickly, it’s not unprecedented when you have the right combination of a great team and market opportunities,” Williston continued.

He explains that Austin has historically been underserved by homegrown, community banks. Keystone Bank’s founding team has the experience and relationships to understand where the Austin market has been, and where it’s heading.

“They’ve been through cycles of growth and pull back. Especially with the national headwinds going on right now, those kinds of insights are crucial for a community,” Williston says. “Success breeds success. Keystone’s ability to keep raising capital from new and returning investors is a testament to what the team has accomplished thus far – and the confidence shareholders have in them to grow with the Central Texas market.”

Keystone Bank is a subsidiary of Keystone Bancshares, Inc., which was founded in October 2018 when Wilkinson recruited a board full of well-seasoned executives and a few core employees. It formed when it acquired Ballinger National Bank, a community bank about three hours northwest of Austin, and simultaneously rebranded it under the Keystone name. New headquarters were established in the Austin area and a commitment on behalf of all was made to bring community banking into the modern era. It acquired the Austin branch of Green Bank in May of 2019.

About Keystone Bank
Keystone Bank launched in 2018 with a maverick and entrepreneurial approach to community banking that truly puts the client first. Keystone Bank operates from its headquarters in Bee Cave, Texas, a branch office in downtown Austin, Texas and a branch office at the Bank’s original location in Ballinger, Texas. Its services include private banking, commercial real estate, residential real estate and small business loans. Keystone aims to be the financial keystone for our customers by being great listeners and even better problem solvers. For more information, visit: http://www.keystone.bank.