IsoSpine is a back traction device that aims to provide deep tissue relief for its users. IsoSpine creators, Iso Life Inc., projects the campaign to raise over $150,000. Rewards will begin shipping starting August 2020. 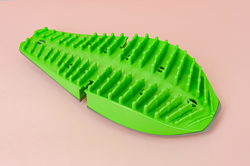 "Tests conducted by Iso Life have found that there are long term benefits of using a back traction device which includes: better posture, proper spinal alignment, and a drastic reduction in chronic back pain."

Since launching on Kickstarter, Iso Life is excited to announce that IsoSpine has raised more than $40,000 in just under 3 days. The company aims to create high-quality, yet affordable products that will help people develop healthier habits and lifestyles. In an age where devices such as smartphones and laptops can encourage bad posture and result in back pain, a device like IsoSpine, that can be used at home has the potential to provide immense value for thousands of people.

The IsoSpine is a back traction device that uses acupressure pins to target specific areas on the back muscle groups and provide deep tissue massaging effects. This helps relax the excruciating tension in the muscles and stretches out the back. This method mimics the techniques that are used by chiropractors, but is available to IsoSpine users at a fraction of the cost.

Founder & CEO of Iso Life, Albert Shin stated that "Tests conducted by Iso Life have found that there are long term benefits of using a back traction device which includes: better posture, proper spinal alignment, and a drastic reduction in chronic back pain."

In order to use IsoSpine properly, there are a series of basic exercises that can be used in tandem with IsoSpine to maximize its effects. A rolling pin is included with each reward and can be mounted on the upper hole for upper back (thoracic) relief, and the lower hole for lower back (lumbar) relief. These exercises are available on the company's website and Kickstarter page.

IsoSpine Kickstarter prices begin at $64 for backers selecting the Early Bird reward which is limited to the first 50 backers. After that, prices go up to $69 for one. Any journalists, editors or social media influencers interested in receiving a sample to review are encouraged to reach out through IsoSpine's Kickstarter page.