Bed bugs reportedly troubled St. Joseph Salvation Army in Missouri. In response, My Cleaning Products gave out tips to help the public kill the pest early and prevent the re-infestation of them. 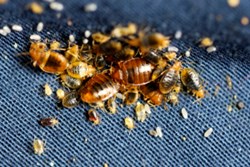 ...Bed Bug Bully is made with organic ingredients so it poses no chemical risks...Moreover, it cited that it is efficient as it could kill no just the adult bed bugs but also their eggs and nymphs.

The bed bugs in Missouri were troubling St. Joseph Salvation Army. And in response to a report about it, My Cleaning Products shared a number of tips how to kill bed bugs and prevent their comeback.

In a report from stjoechannel.com published on February 18, 2014, it was said that the critters had been pestering the shelter for the past two years already. And to get rid of them for real, it stated that the management had set a plan for a bed bug treatment.

The report shared that the process would cost the shelter some $25,000. Despite that, it relayed that Salvation Army saw no reason to spend the amount.

For the duration of the bed bug treatment, the report said that the shelter would close temporarily. And as it added, the elimination process will start in the next few weeks.

Here is an excerpt from the post Bed Bugs Pester Missouri Salvation Army by My Cleaning Products.

“The pesky bed bugs have found their way to St. Joseph Salvation Army in Missouri. Nonetheless, their presence wasn't a surprise to the shelter's staff and guests given that they've been pestering them on and off for the past two years already.

A guest shared that he gets bed bug bites up and down his arms every single night he stays in the shelter. So to solve that problem and to protect him and everyone else in the building, the management set to get rid of the crawlies.”

According to MCP, one of the things that makes bed bugs some of the worst pest is the fact that they are difficult to completely eradicate. It said that they could infest a place, get eliminated and re-infest it. And with that, it cited that they could various expenses.

However, My Cleaning Products stated that the re-infestation of those critters and all the problems they bring could be avoided if they are eliminated early. That way, they could be prevented from multiplying and further spreading, it said.

To be able to kill bed bugs early though, MCP stressed that one would a bed bug spray. And because the process needs to be safe, apart from effective, it only recommended the use of Bed Bug Bully.

The company said that Bed Bug Bully is made with organic ingredients so it poses no chemical risks. In fact, it shared that it is already in the FIFRA 25(b) list for being a pesticide-exempt. Moreover, it cited that it is efficient as it could kill no just the adult bed bugs but also their eggs and nymphs.

To try it, MCP urges everyone to visit its website at mycleaningproducts.com of a Bed Bug Bully Complimentary Sample.